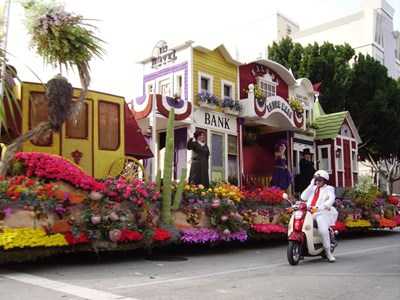 The Rose Parade
The Rose Parade, hosted by the Pasadena Tournament of Roses, is an annual parade held mostly along Colorado Boulevard in Pasadena, California, on New Year's Day (or on Monday, January 2 if New Year's Day falls on a Sunday). Usually beginning in the morning at 8:00 a.m. Pacific Time (UTC–8), it is produced by the non-profit Pasadena Tournament of Roses Association and includes flower-covered floats, marching bands, and equestrian units. The parade is followed in the afternoon by the Rose Bowl, one of the major bowl games in college football.
Source: wikipedia.org
Tags
Culture and HistoryFestivals and Events
Related goals for California:


Latest Activity
6 people want to do this. 3 people have done this.

Added by Lauren. 2 years ago

Added by Rachel Quinn. 5 years ago

Added by Drea Delgado. 6 years ago

Added by Cindy Belmonte. 6 years ago

Added by Swan. 6 years ago

Added by Kate Collins. 6 years ago

Added by Irene I. 6 years ago