Get a tattoo - added by astarlightpanda

Go one month without soda - added by mvmanasa

Go a month without eating fast food - added by mvmanasa

Pay for someone's order behind me in line - added by astarlightpanda

Give someone a handmade gift - added by astarlightpanda

Latest Activity
123 people want to do this. 11 people have done this.

So I was able to save up some money, but the problem was is I had to dip into my savings too much to make ends meet when I took too much time off of work. (So I could finish my BSN and all that stuff) so I don't think this is a realistic goal for me anymore

So I haven't done this as well as planned. the thing is, I don't have a steady job right now so it is hard. I am not necessarily holding my head above water but... I am pretty close to that. I mean it is just weird and whatnot.

I know this is horrible but I have not added to any of my savings the past few months. I don't know if I can catch up since I might be dipping into it soon so that I can have a start-up of money for my new contract. I am keeping this here. So that maybe I can do this. But I don't know.

Note added by Eliza Jazinski. 1 years ago
MAY PROGRESS:

So, this is going "swimmingly". I have been saving more than what is on my list of what I must do to make the $5000. Maybe I should have kept track of what I actually over save so that I can complete this before the 52 weeks... But I ended up doing this so that I can do a 52 week money saving type challenge. Anyway Its been helpful!

Hiccups: So, this lady stole money from me. about 1500$ and I had some Taxes thing that came up almost $6000, so I am trying to replenish this as well but I it is not interfering with the other money I am trying to save. So its kinda a bit of everything all at once.

Note added by Eliza Jazinski. 1 years ago
MARCH PROGRESS: So I am about 2 weeks behind right now. I am barely starting my new assignment so its been a bit rough. I will catch up once I get paid though. This continues to be important to me.

Note added by Eliza Jazinski. 1 years ago
FEBRUARY PROGRESS: This isn't quite a habit, but I have it in my planner so that I remember to do this every week. I think part of the problem is that I am not currently getting paid so its a bit harder for me to remember to do this.

Note added by Eliza Jazinski. 1 years ago
JANUARY PROGRESS: I have made this into a habit to put money into the bank every paycheck.

Note added by Eliza Jazinski. 1 years ago
Week 1 and 2: Decided to do this backwards (so I can just add more money closer to the New Year instead of the ending of the year) I think it would be harder to save money closer to Christmas. Anyway, I have saved $200 and then $130 so far.

I have also put in my planner for the rest of this month the other savings plan ( I should probably do this for the whole year but.. I don't know if I will keep going backwards or not. So I will see about all that) 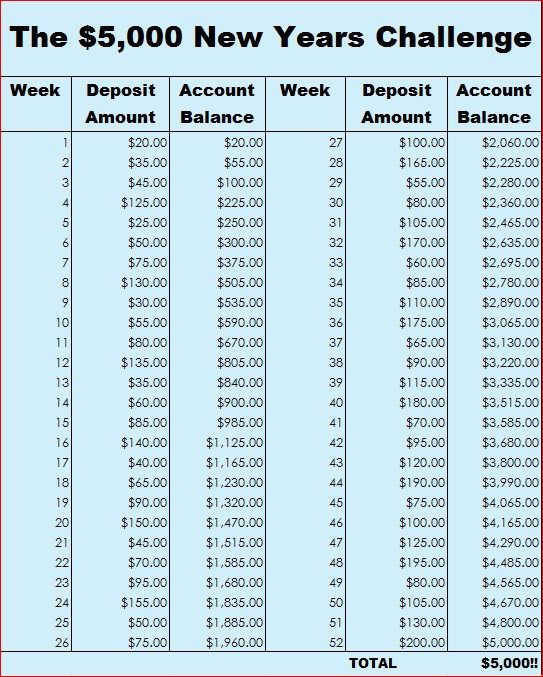 I am probably gonna do this more out of order (save the less amounts while I am on my break from work). Anyway This is the plan for this year