Tags
Hobbies and SkillsPersonal DevelopmentTravel
Featured Lists
This goal was mentioned in the Feature List:
50 Things To Do for Free or Cheap

Don't spend any money for a week - added by svnuno

Invent my own sandwich - added by sweethomeboy1

Take a ghost tour of Savannah - added by zenarya

Decorate the house with Christmas lights - added by zenarya

Kiss in the rain - added by divinefeminine

Learn a poem by heart - added by divinefeminine

Latest Activity
1370 people want to do this. 72 people have done this. 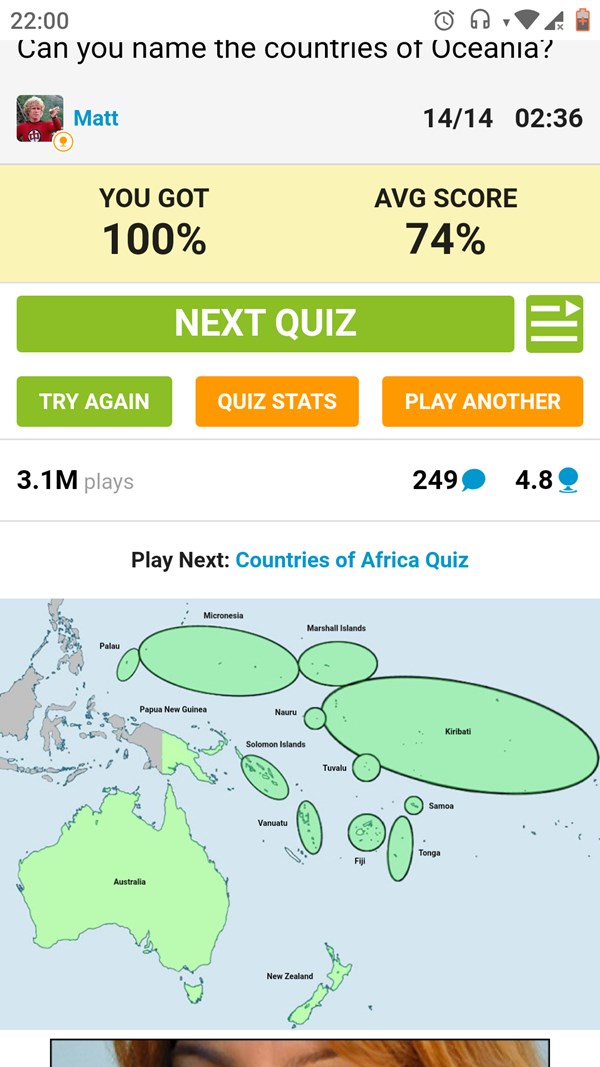 I knew the least info about these countries, now I know a bit more 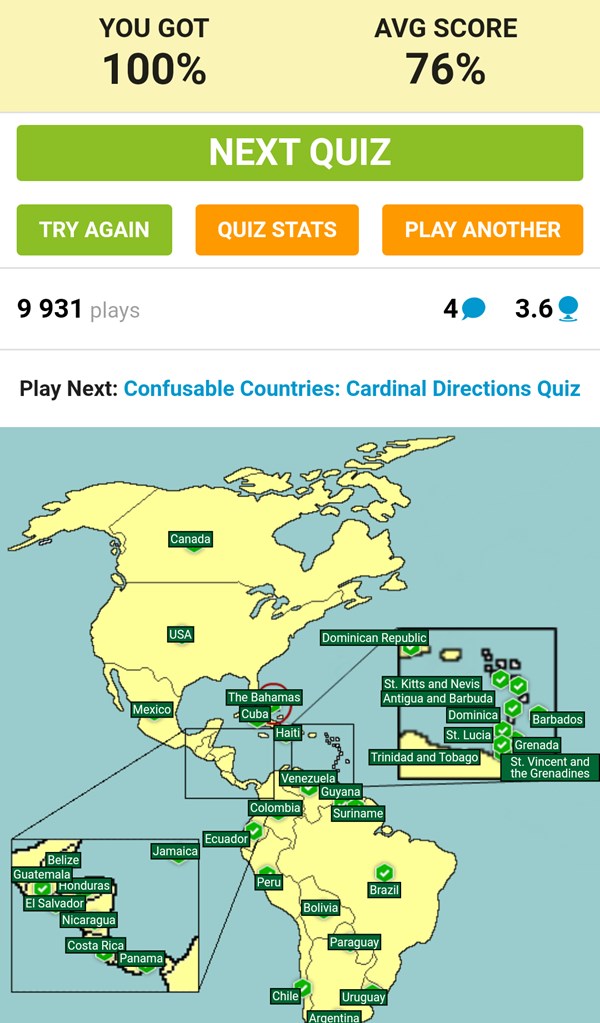 The Caribbean Islands were difficult to remember 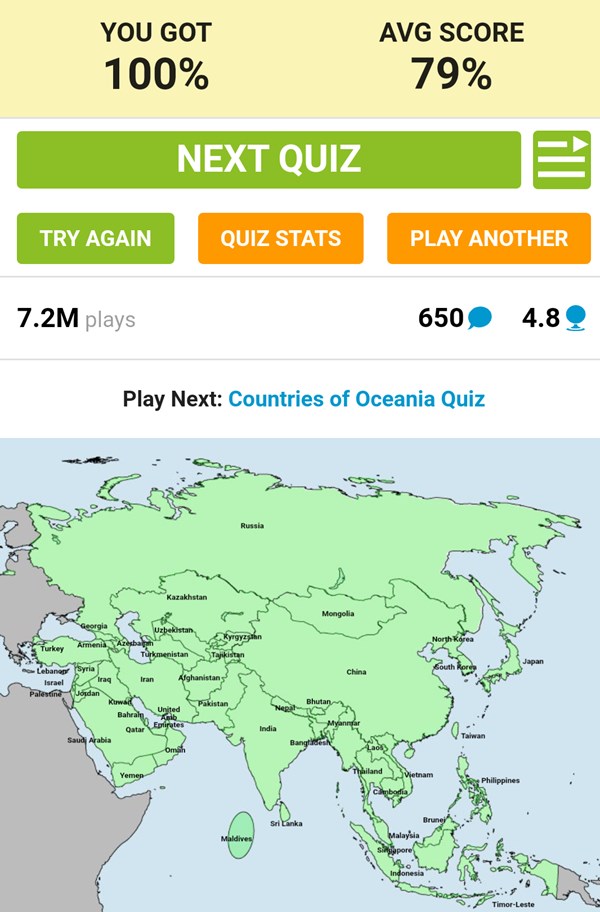 I learnt a lot of new things with this one

Maybe the easiest one (but not as easy as I thought) 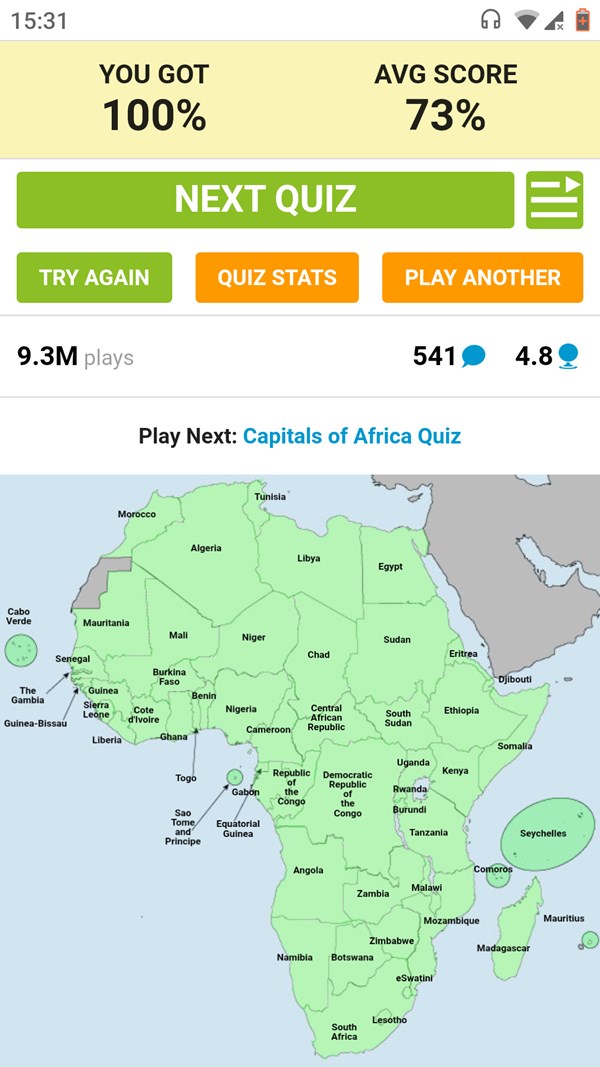 This was the most difficult one so far

Note added by Bárbara Marques. 1 years ago
- América do Sul. 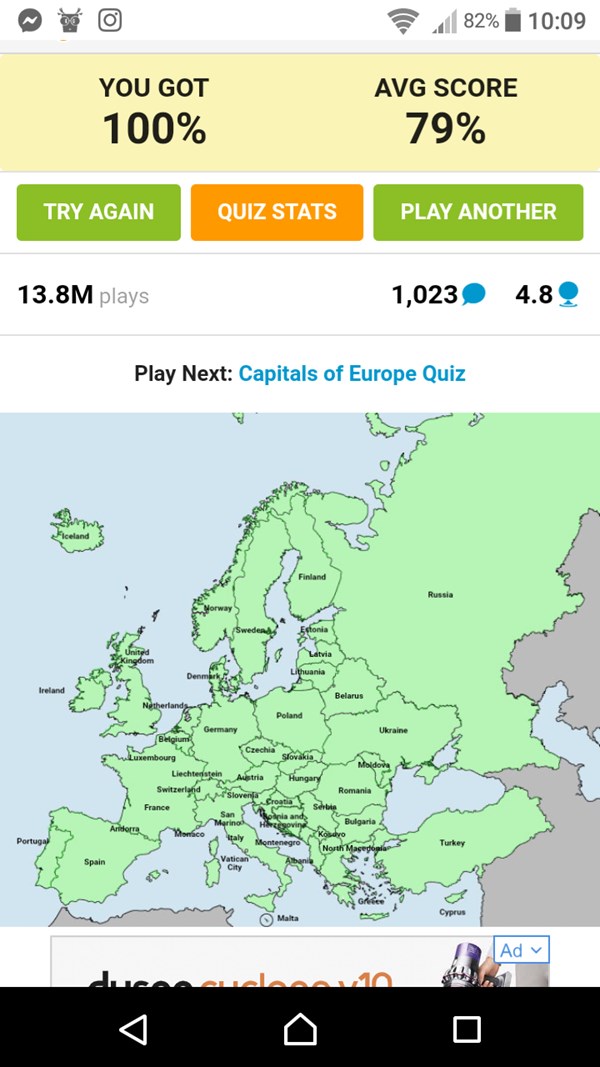 Europe done! The south east was tougher than I expected. No matter, I've got it down, now I can move onto North America. 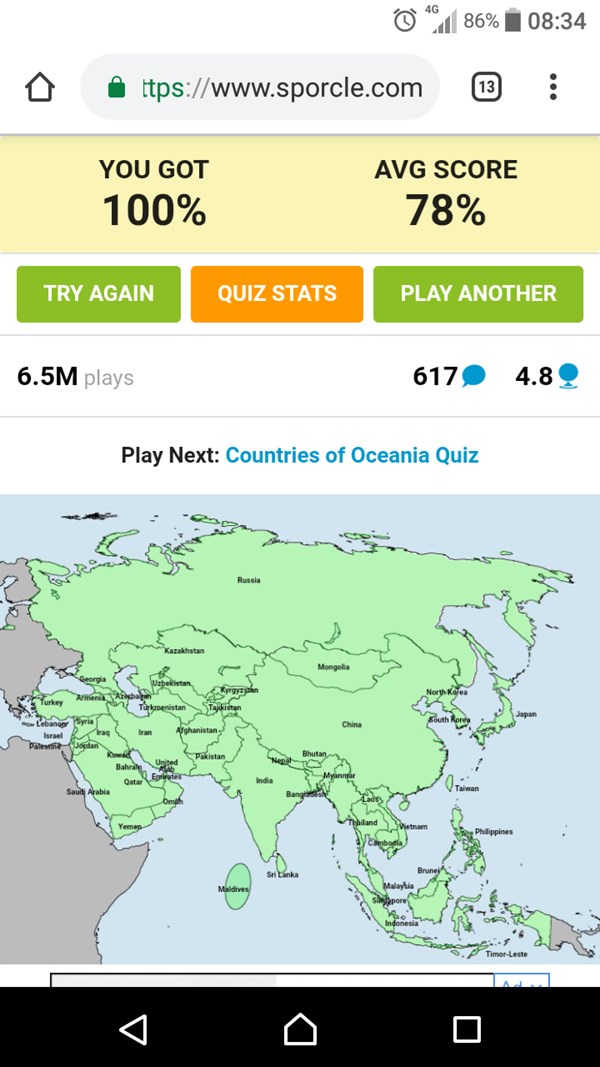 I'm doing well - I've done this test several times at 100% I think I'm ready to move onto the next continent! 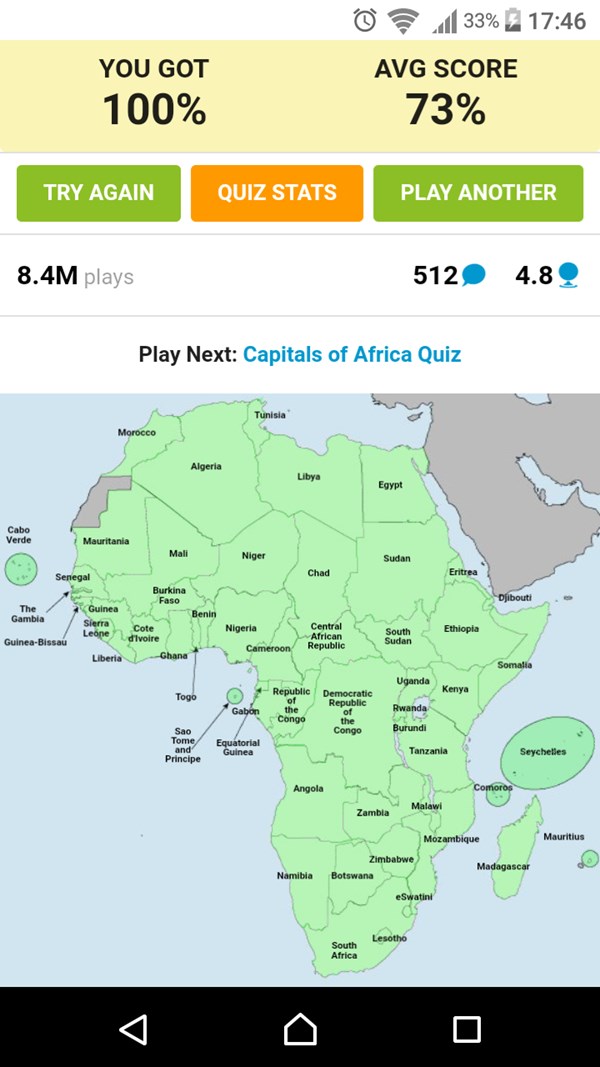 I'll try the test again in a few days to test my memory. 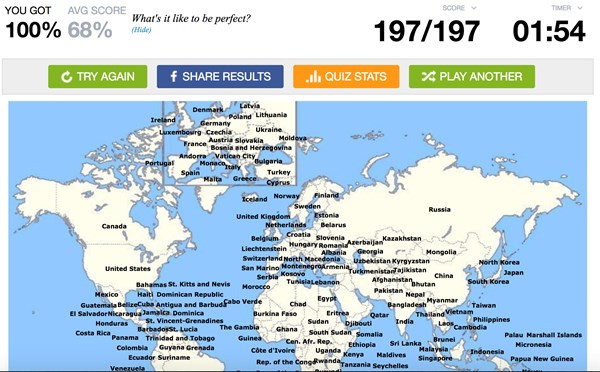 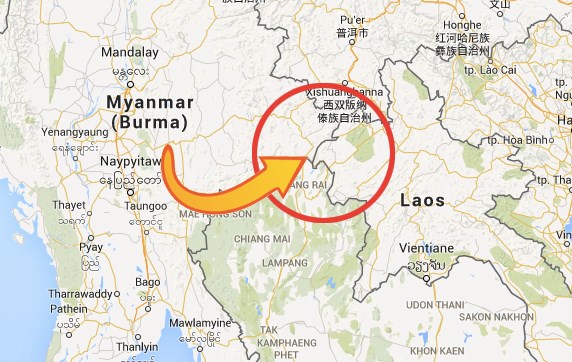 One month later: I set up a display at the library with "Fun Facts" about me, in honor of my April birthday. And one of the facts I put was, "Knows the location of every country in the world." So this woman comes up to me and says, "Do you know where Myanmar is??? It says you know the location of every country," in a sort of rude voice, and I draw an invisible picture of Myanmar on the map with my finger and say "Yeah, it's over by like Laos, and India." And she says, "NO!!! It's between India and Thailand!!!" Sigh. 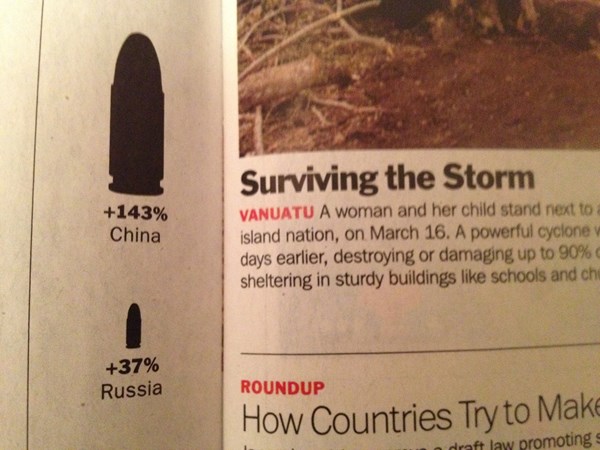 Literally two days after I memorize Oceania, Vanuatu shows up in Time.

. 5 years ago
Done. I can fill in a blank map of the world. I feel amazing. There have been several times already that I've heard a country mentioned and, for the first time, known where it is. "Kenya! That's the one that looks like a starfish!" 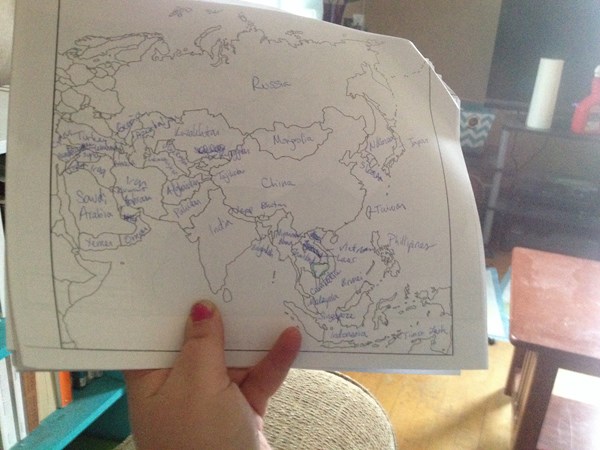 Actually there's a mistake on this but I did it again completely right. 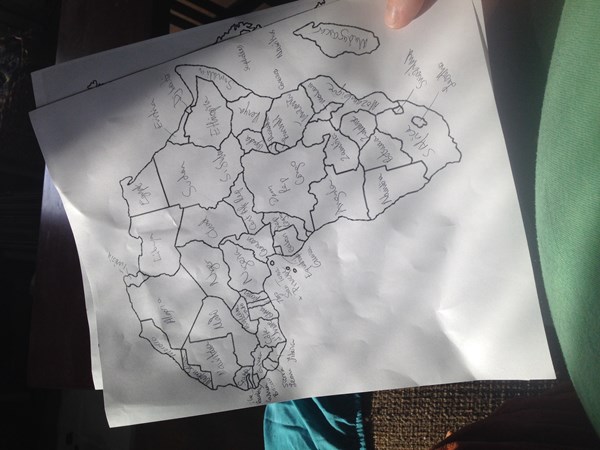 1. Never in my life did I expect to be able to do this.
2. Somebody needs to ask Day Zero why half the photos you upload to this site come out sideways.

Note added by Karen M Dewey. 6 years ago
Got Europe, working on Africa for the fun of it!

Note added by Sarah Gregory. 6 years ago
100% with 4 mins to spare =] So please that's on http://www.jetpunk.com/quizzes/how-many-countries-can-you-name.php
Now I will learn all the other little islands in Oceania and around the Caribbean.

Note added by Sarah Gregory. 6 years ago
*sqeals* 93% 182/196
I really love these kind of things. I forgot some spelling for some in Africa fand missed 3 off Oceania and 3 off N. America. Everything else 100%

I have got Europe, Asia and South America perfect. I missed 2 from Central America. Africa is getting there slowly but haven't learnt to locate those yet. Learning Oceania now.

I got all of Europe. Would have got all of Asia if I learn to spell Azerbaijan and Krygyzstan. Missed 2 countries from South America. Not too bad on N . America. It's Africa I really have to work on.

Note added by Sarah Gregory. 6 years ago
76% 148/196
I knew a lot more of the Middle East and Asia this time round as well as all of Europe. Really getting there now =]

Note added by Sarah Gregory. 6 years ago
63% with all the countries of Europe complete.

It didn't take too long to learn all the European countries, And can now identify them on the may by using this http://www.sheppardsoftware.com/Europe/Eur_G0_1024_768.html

Note added by Sarah Gregory. 6 years ago
31% this time round

Note added by Sarah Gregory. 6 years ago
31% this time round

Note added by Sarah Gregory. 6 years ago
This may take some time. I took this quiz http://www.jetpunk.com/quizzes/how-many-countries-can-you-name.php and scored 50 out of 196 = 26% eeep.

And that's just guessing countries not even locating them yet.

Note added by Anja. 8 years ago
Done (apart from all those tiny island countries in the Caribbean and Oceania)