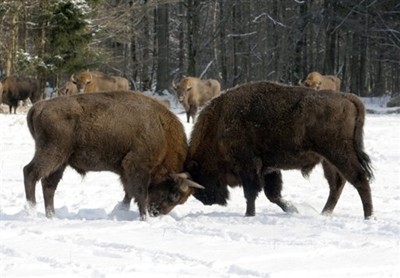 Bison in Bialowieza National Park
"Two bison lock horns in the Bialowieza National Park. Some 800 bison roam freely in the Bialowieza mountains that sit between Poland and Belarus. The animals, distant cousins of the American bison, are considered living miracles after the whole population of 700 beasts was masacred by local poachers and the German divisions present during the First World War."
Source: bp21.org.by
Related goals for Poland:

Pay homage to the victims of the Holocaust at Auschwitz

Latest Activity
5 people want to do this.

Added by Rachael Ranno. 7 years ago

Added by Erica Bee. 7 years ago