WIPs - The Sending by Isobelle Carmody, Mistress of the Empire by Raymond Feist and Janny Wurts, Six of Crows by Leigh Bardugo

24 Feb, 18
Ko
Note added to goal Marathon the Star Wars movies
Finished today!! A mild marathon consisting of 2 films per day except for the first and last. Saw The Last Jedi at the cinema today.

Rogue One was not included in this marathon.

02 Jan, 18
Ko
Note added to goal Watch the sunrise
Technically... done... and not done. As in, I got up and experienced dawn on January 1st, but I also did not get much of a look at the sunrise.

02 Jan, 18
Ko
Note added to goal Travel overseas again
Back from Japan! Short trip as a chaperone for students for our sister city exchange with Miki in Japan.

15 Oct, 17
Ko
Note added to goal See a waterfall
Up at Bright, while visiting family friends. Should add some pictures for this one.

15 Oct, 17
Ko
Note added to goal Go to a temple
Again we'll say Itsukishima even though I went to several temples. Beautiful!

15 Oct, 17
Ko
Note added to goal Go to the beach
Itsukishima on Miyajima Island - waded into the water to check out the shrine. Not a typical beach experience and I loved it.

15 Oct, 17
Ko
Note added to goal Go hiking
Just going to say that this is done since I hiked up to view the waterfall at two different layers near Bright!

15 Oct, 17
Ko
Note added to goal Travel overseas again
I've been given the opportunity to go to Japan again, this time to chaperone the school kids going over. It should be in October. Yay!

13 May, 17
Ko
Note added to goal Get a hysterectomy
Or some other decent form of period control ie. endometrial ablation if it works.

01/03/17 - got a Mirena inserted. This is the third period I've had since, but the bleeding and cramps are less. Hopefully they will be even better in following months.

13 May, 17
Ko
Note added to goal Pick my name
First name is probably finally worked out! It's going to be Kora, aka Ko, aka Kolya. Look at all the angles I can cover with this name. *w* Middle name is still a work in progress that I'll probably ask Mum about, while looking through my own list.

18 Jan, 17
Ko
Note added to goal Do the HCG diet for at least 4 weeks
I don't remember when I started or finished this, but it was sustained for a good 6 weeks or so and was a good run!

26 Dec, 16
Ko
Note added to goal Lose 15kg
Reasonably sure that by my birthday next year I should be able to achieve this.

I can start the HCG diet in about a month, and this week I'm stopping with my junk food and will start aiming for 1500 calories a day even though I'm terrible with counting calories lol.

26 Dec, 16
Ko
Note added to goal Watch a meteor shower
Signing this one off for now, since we - my dog and I - made an attempt at watching the Orionids tonight. Caught one right at the beginning, three in quick succession about 10 minutes in, and then a period of silence for the next half hour. May try again at about 4am.

22 Oct, 16
Ko
Note added to goal Learn Korean
Set up my notebooks, finally! It's a start.

Got a notebook set up (name of language on the front, alphabet inside) for:

Have also printed off the Australian Sign Language alphabet, which probably needs to be a poster.

Will make labels for the spines of these notebooks, as they're quite thick and all the same.

Mandarin will need a different approach, as there is no 'alphabet' as such.

To do: gather all language learning resources in one spot so they're all easy to access - I still have Italian work from high school etc that will be useful.

I also have two notebooks left over - one will be for Mandarin, since I can still do work in the book, and the last will be for my Japanese N2 study.
16 Oct, 16

Ko
Photo added to goal Go to an aquarium 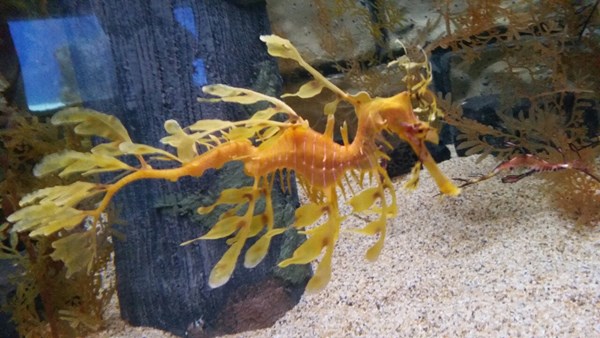 03 Oct, 16
Ko
Note added to goal Get a diagnosis
First formal diagnosis completed! The rheumatologist said I had 'textbook' fibromyalgia. I won't be surprised if there's something else in there at some point in time, but at present I'm happy that we can start treating something. I found it an interesting and slightly unexpected diagnosis as I haven't considered my widespread pain the main symptom (I'm not sure what I considered the 'main' - general poor health and fatigue, maybe?), fibro was not a viable diagnosis in Australia until recently (I need to find out when it changed), and I had believed that 'trigger points' were a necessary diagnosis (which he said were not).

He asked me to go away and consider treatment options, which are basically a few recommended medications and some non-medication alternatives such as acupuncture, tai chi and yoga, 'diet' (no specific one, just 'eat healthy'?) and possibly a few others.

I have a lot of reading to do, as what he provided me with was incredibly basic and really reminded me of what I already knew of the condition. Going forward, I would like to try one of the medications recommended (the serotonin noradrenaline reuptake inhibitors sound good, although they are still anti-depressants and I'm not sure if I can handle those again), a physio program and massage or osteo to complement it (it would be useful if he could refer me so I could get cheaper sessions or something) and the mysterious 'diet', along with tai chi and yoga which I am already doing casually.

03 Oct, 16
Ko
Note added to goal Go to an aquarium
Went to the Melbourne aquarium with Amy today (03/10/16)! It was wonderful, if exhausting and sore. We got there at about 1:30pm, and walked around it for maybe 1.5-2 hours. Highlights included Mars the giant ray, Mitchell the... something shark (he was brown and had fork teeth, and can't eat anything he has to chew) and Mr G. (Gigantor) the potato fish, who is currently 250kg and will be 500kg when he's fully grown. Other highlights were the jellyfish in tanks with changing lights, the seahorses, the seadragons (!!!!!!!! the leafy seadragon was so beautiful, in a tank with a lot of weedy seadragons) and the penguins.

Lovely day, and it was free because I was able to use a MacDonald's Monopoly 'Free Day Out' pass for it. Bonus.

03 Oct, 16
Ko
Note added to goal Create a vision board
I ended up making a vision board on Pinterest for this whole 101/1001 thing! I'd also like to make a few more, maybe more specific, but this one as a whole focuses on all the goals I'm aiming to achieve with this list.

22 Sep, 16
Ko
Note added to goal See another stage show
Saw Matilda at the Princess Theatre in Melbourne today! With Mum, Kellie, Matt and Noah. It was great and I'm happy.

Highlights included Rodolfo, the Russian mafia, 'maggot', the redhead with a mic and the way this play made Miss Honey an abuse survivor as well as Matilda.

17 Sep, 16
Ko
Note added to goal Write a personal manifesto
Just wrote my first personal manifesto! Based off the word "spark", which has a lot of meaning for me. It will need revisiting, but I think it's worked out okay for now. A much better start than I might have otherwise anticipated, since I had no idea what to do with this one.

16 Sep, 16
Ko
Note added to goal Get a diagnosis
Saw the rheumatologist this past Monday (05/09). He was sceptical about me having EDS - which I believe is more a lack of knowledge on EDS than anything else - but said he was pretty much certain what I have, so at least I should be getting a diagnosis from him.

I had a bunch of blood tests and urine tests done, and looking them up told me they're mostly related to lupus, so I suspect that's what he's banking on. I also have an MRI I need to book and get done before my next appointment with him.

08 Sep, 16
Ko
Note added to goal Work out the rest of this list
Put up my final goal - Learn Kapampangan - just today! At this point I've decided not to change any goals significantly, or remove any. If I get inspiration for a new goal, I might, but at the moment this is it.

I've completed both the compulsory units and have completed and passed my first assignment, yay!

Now to pass my three units by submitting everything by the due date:

I'm not intending to do the 30 days all in a row, because that's a terrible idea for my body. We'll mix it up with walking and tai chi for a change of pace. Tonight we'll do Day 3, then tomorrow probably another round of tai chi.

During the week we do yoga and tai chi and weekends are for walking because by the time we're both finished with work it's too dark to take the dogs out.

16 Aug, 16
Ko
Note added to goal Make a proper bowl of ramen
Made ramen tonight for dinner! A packet one, of course, but it was a lovely Kyuushu one a friend brought with him when he came to stay. Tonkatsu flavoured, this particular one. I added bamboo shoots, bean sprouts, spring onion, half a boiled egg and sesame seeds, and also had a bowl of edamame to go with it. It was so good. *w*

19 Jul, 16
Ko
Note added to goal Go to an art gallery or museum
Visited the National Gallery of Victoria today - the primary exhibition we saw was 'Luminous: Australian Watercolours 1900-2000'. Good stuff. Before that we headed to ACMI to see 'The Nightingale and the Rose', an exhibition focused on a short animated film with art by Del Kathryn Barton and some music by Sarah Blasko. Incredible.

08 Jul, 16
Ko
Note added to goal Get a diagnosis
Gastroscopy, colonoscopy and iron infusion today. Pending biopsy results there is nothing at all going on, which I feel supports my EDS diagnosis.

04 Jul, 16
Ko
Note added to goal Meditate daily for 30 days
04/07 - started a colouring book. Will maintain this as my meditation.

04 Jul, 16
Ko
Note added to goal Marathon the Harry Potter movies
1/8 done on 04/07 - note that my version of 'marathon' is 'watch the movies in chronological order without leaving too much time between each', so as long as i watch the next few over the next 2 months or so I should be fine.

28 Jun, 16
Ko
Note added to goal Get a diagnosis
In the process of getting a formal diagnosis, probably for EDS at this point. Procedure on 07/07/16 with a gastroenterologist which may explain some gut problems; appointment with a rheumatologist on 05/09/16 which will hopefully give me a diagnosis of EDS and look into any autoimmune issues etc.

24 Jun, 16
Ko
Note added to goal Get accepted into a university course
Got an email from the university yesterday saying I've been accepted.