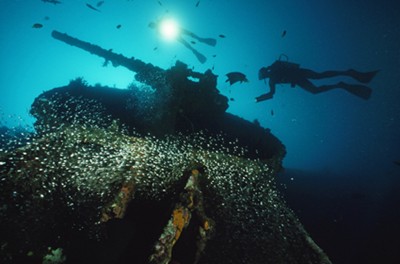 Diving the SS President Coolidge
"When she was christened by the widow of her namesake in 1931, the President Coolidge was as opulent as any pleasure ship plying the world’s waters, with an elegant smoking lounge, a shopping arcade, even its own stock exchange. A decade later the Coolidge was converted to an Army transport ship to help with the war effort; she was bringing reinforcements to American troops in the South Pacific when she struck a mine and sank off the coast of Vanuatu. Penetration is superb, and skilled divers can explore the engine room and dining room, or drift along the promenade deck. The largest and most accessible wreck of the Second World War, the Coolidge is in a class of her own."
Source: bigbluetechnews
Tags
Outdoor Adventure
Related goals for Vanuatu:

Visit the National Museum of Vanuatu


Latest Activity
3 people want to do this.

Added by LydiaAbigail. 7 years ago