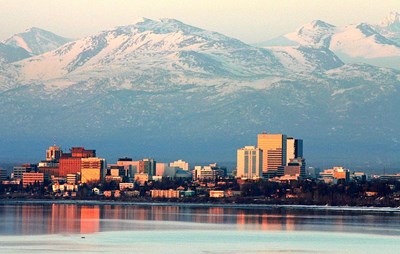 ABOUT ALASKA
Alaska is the 49th and largest state in the United States of America. Separated from the rest of the country, (the "lower 48"), by Canada, Alaska lies on the Arctic Circle. It is still the least densely populated state in the union and for a long time was home to the lowest population. America's final frontier is the size of California, Texas and Montana combined, making it huge in comparison to the rest of the states! Alaska is also home to the highest point in North America and all of the top ten highest mountains in the USA. Across the Bering Strait lies the country of Russia and the continent of Asia.
Popular Goals

Denali National Park and Preserve is located in Interior Alaska and contains Denali, the highest mountain in North America. The park and preserve together cover 9,492 mi² (24,585 km²).

Glacier Bay National Park and Preserve is a United States national park and preserve in the Alaska panhandle west of Juneau. President Calvin Coolidge proclaimed the area around Glacier Bay a national monument under the Antiquities Act on February 25, 1925.

The Iditarod Trail Sled Dog Race, in Alaska, where mushers and teams of typically 16 dogs cover 1,161 miles (1,868 km) in nine to fifteen days from Willow to Nome. The race begins on the first Saturday in March (the 2010 race began on March 6). The Iditarod began in 1973 as an event to test the best sled dog mushers and teams, evolving into the highly competitive race it is today.

Marvel at the northern lights in Alaska

Gates of the Arctic National Park and Preserve is a U.S. National Park in Alaska. It is the northernmost national park in the U.S. (the entirety of the park lies north of the Arctic Circle) and the second largest at 13,238 mi² (39,460 km²), about the same size as Switzerland. The park consists primarily of portions of the Brooks Range of mountains. It was first protected as a U.S.

See the salmon run in Alaska

The Chilkoot Trail is a 33-miles (53 km) trail through the Coast Mountains that leads from Dyea, Alaska, in the United States, to Bennett, British Columbia, in Canada. It was a major access route from the coast to Yukon goldfields in the late 1890s. The trail became obsolete in 1899 when a railway was build from Dyea's neighbor port Skagway along the parallel White Pass trail. The Chilkoot Trail and Dyea Site was designated a U.S. National Historic Landmark in 1978.
Festivals and Events

Attend the Anchorage Festival of Music

Attend the Kodiak State Fair and Rodeo
Other Goals

See the salmon run in Alaska

Ride the Rails of the Historic Alaska Railroad

Drive the Seward Highway from end to end

Visit the Gates of the Arctic National Park

Seakayak near a calving glacier

Cruise the fjords in Alaska

Hike the Mendenhall glacier in Juneau

Heli-Ski the Chugach Mountains
“
In the Chugach Mountains, first descents are still routine, and nameless peaks promise more skiable terrain than even the biggest resorts in the Lower 48. Valdez serves as base for five of the seven heli-ski outfits that work the Chugach, but only Points North takes off from Cordova. Its clients gain nearly exclusive access to a 2,000-square-mile (5,180-square-kilometer) chunk of mountains, then retreat to the Points North Orca Adventure Lodge, a converted cannery." 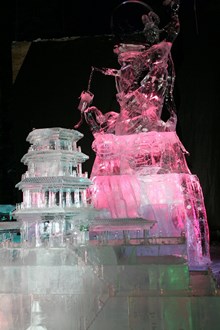 Attend the World Ice Art Championships
The World Ice Art Championships is an ice sculpting contest in Fairbanks, Alaska put on by Ice Alaska, a non-profit corporation started in 1989. The contest is the largest of its kind in the world and attended by more than 100 sculptors from 30 different countries every year. The contest also draws tens of thousands of spectators; in 2004, 48,000 people from more than 28 countries passed through the park's gates. 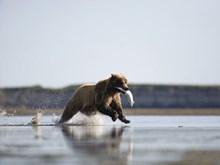 Camp With Alaska Brown Bears
“
It’s thrilling to see big browns with no fence or barrier between you and them. At the Great Alaska International Adventure Vacations Bear Camp, you can quietly watch a dozen or more brown bears from a spruce-fringed meadow that lies between Mount Iliamna in Lake Clark National Park & Preserve and Cook Inlet." 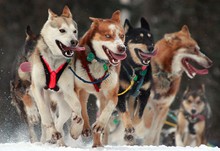 The Iditarod Trail Sled Dog Race
The Iditarod Trail Sled Dog Race is an annual long-distance sled dog race run in early March from Anchorage to Nome. Mushers and a team of 16 dogs, of which at least 6 must be on the towline at the finish line, cover the distance in 9–15 days or more. The Iditarod began in 1973 as an event to test the best sled dog mushers and teams but evolved into today's highly competitive race. The current fastest winning time record was set in 2011 by John Baker with a time of 8 days, 19 hours, 46 minutes, and 39 seconds.

Cheer at the start and the finish of the Iditarod 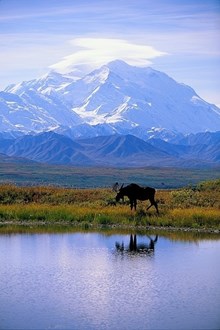 Denali National Park
Alaska is the absolute last wilderness frontier that has been left virtually unexplored and the state that gave us Sarah Palin! Visit Denali National Park with its wildlife and scenic mountains, including Mount McKinley, the highest mountain in the US. Its breathtaking beauty of rugged snowy mountains, forest upon forest of pine trees hugging the lower slopes of these ranges and the complete isolation and loneliness except for wolves, black bears and the odd trapper, leaves the mind boggling. 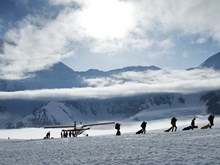 Mount McKinley
“
Standing atop the highest point in North America requires a good bit of luck and a big investment of time. The biggest obstacle on 20,320-foot (6,194-meter) Mount McKinley (or Denali, in native Athabaskan), which is the centerpiece of Alaska’s Denali National Park & Preserve, is the weather." 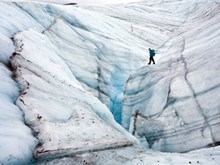 Wrangell-St. Elias National Park & Preserve
“
Alaska’s Wrangell-St. Elias National Park & Preserve, the country’s largest national park, operates on an entirely different scale than the Lower 48. Let’s just review the numbers: Six times the size of Yellowstone, it’s home to the country’s largest collection of glaciers and peaks over 16,000 feet (4,879 meters), including nine of the 16 tallest mountains. Parts of the national park are so remote and unexplored that mountains, glaciers, and passes remain unnamed, and only two roads—both gravel—enter it at all." 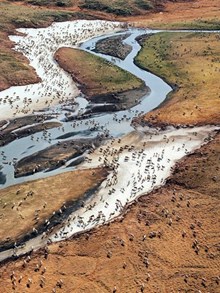 Explore ANWR
“
North America’s most impressive (and most politicized) wildlife spectacle occurs each June in the continent’s northernmost no-man’s-land. That’s when and where the 200,000 caribou of the Porcupine herd culminate their 400-mile (644-kilometer) annual march from the Yukon to the coastal plains of the Arctic National Wildlife Refuge (ANWR)." 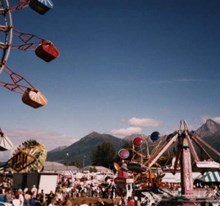