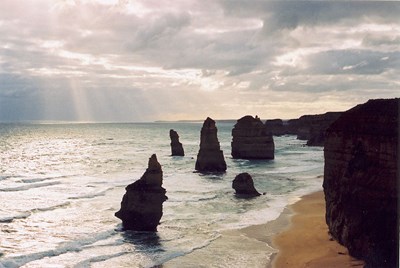 ABOUT AUSTRALIA
Australia is the only country that has a whole continent to itself. World famous for its natural wonders and wide open spaces, its beaches, deserts, "the bush", and "the Outback", Australia is actually one of the world's most highly urbanised countries. It is also well known for the cosmopolitan attractions of its large cities such as Sydney, Melbourne, Brisbane and Perth.
Source: Wikitravel
Popular Goals

The Great Barrier Reef is the world's largest reef system composed of over 2,900 individual reefs and 900 islands stretching for over 2,600 kilometres (1,600 mi) over an area of approximately 344,400 square kilometres (133,000 sq mi). The reef is located in the Coral Sea, off the coast of Queensland in north-east Australia. The Great Barrier Reef can be seen from outer space and is the world's biggest single structure made by living organisms.

The Great Barrier Reef is the world's largest reef system composed of over 2,900 individual reefs and 900 islands stretching for over 2,600 kilometres (1,600 mi) over an area of approximately 344,400 square kilometres (133,000 sq mi). The reef is located in the Coral Sea, off the coast of Queensland in north-east Australia. The Great Barrier Reef can be seen from outer space and is the world's biggest single structure made by living organisms.

Uluru, also referred to as Ayers Rock, is a large sandstone rock formation in the southern part of the Northern Territory, central Australia. It lies 335 km (208 mi) south west of the nearest large town, Alice Springs; 450 km (280 mi) by road. Kata Tjuta and Uluru are the two major features of the Uluṟu-Kata Tjuṯa National Park. Uluru is sacred to the Pitjantjatjara and Yankunytjatjara, the Aboriginal people of the area. It has many springs, waterholes, rock caves and ancient paintings.

Sydney New Year's Eve is an annual multi-tiered event held every New Year's Eve over Sydney Harbour, centering on the Harbour Bridge. Its main features are the two pyrotechnic displays, the 9pm Family Fireworks and the Midnight Fireworks, both of which are televised nationally by current broadcaster the Nine Network. Each year the event takes on a new theme and is regularly viewed by more than one million people at the harbour and one billion worldwide for the televised Midnight Fireworks.

Sydney Harbour National Park is a national park comprising parts of Sydney Harbour, its foreshores and various islands. The park lies within the Sydney metropolitan area and was created in piecemeal fashion during the 20th century. Much of the harbour foreshores had been spoiled by residential development; what remained was preserved partly because of the presence of military bases, and partly because of the work of conservationists.

Sydney is the most populous city in Australia and the state capital of New South Wales. Sydney is classified as an Alpha+ World City indicating its influence in the region and throughout the world. Sydney is located on Australia's south-east coast of the Tasman Sea. As of June 2010, the greater metropolitan area had an approximate population of 4.6 million people. Inhabitants of Sydney are called Sydneysiders, comprising a cosmopolitan and international population.

Visit Melbourne
Melbourne is the capital and most populous city in the state of Victoria, and the second most populous city in Australia. The Melbourne City Centre is the hub of the greater metropolitan area and the Census statistical division—of which "Melbourne" is the common name. As of June 2010, the greater geographical area had an approximate population of four million. Inhabitants of Melbourne are called Melburnians or Melbournians.
Festivals and Events

See in the New Year on Sydney Harbour

Go to the Melbourne Comedy Festival

Go to the Melbourne Cup

Be at the finish line of the Sydney Hobart Yacht Race

Participate in the World's Greatest Pub Fest in Australia

Go to the annual Outback Festival in Winton

Walk across the Sydney Harbour Bridge

See a performance at the Opera House

Spot a platypus in the wild

Go to Hanging Rock in Australia

Spend a few days at a Great Barrier Reef island

Complete the Uluru base walk

Hike the Bay of Fires, Tasmania

Marvel at the wildlife on Kangaroo Island

Have a ‘barbie’ with local friends on the beach

Visit the Wet Tropics of Queensland

Meet the dolphins at Monkey Mia

See Australia on The Ghan

See where the rainforest meets the sea in the Daintree

Cross the country both ways by train

Take a hot-air balloon flight over the Red Centre

Visit the Gondwana Rainforests of Australia

Grab a seat at the Australian Open

Find a pearl in Broome

Go to a cricket match at the MCG

Join the dawn service at the Australian War Memorial

Watch the sunset from Steep Point

Walk the rim of Kings Canyon

Take a year off and drive around Australia

Have a picnic into the night at Tropfest

Hire a van and drive around Tassie

Hire a houseboat on the Hawkesbury

See Tasmanian devils in the wild

Explore the unknown on the Torres Strait Islands

Look into Australia’s convict past at Port Arthur

Swim in the Great Barrier Reef

Drive across the Nullarbor Plain

Go back to nature in Kakadu

Join a cattle drive in The Outback

Take a seaplane to Whitehaven Beach

Fly over the Bungle Bungles

Visit the National Gallery of Victoria

Stay on an outback cattle station

Trek to the Bay of Fires

Marvel at The Pinnacles

Paddle down the Murray on a paddleboat

Go off-roading in the countryside

Eat your way around King Island

Have a picnic at Hanging Rock

Stay at a real Aussie pub

Visit All Australian States and Territories

Visit all states of Australia

Go walkabout in the Land of the Never Never

Take the family to a Great Barrier Reef island

See the Devils Marbles up close

Walk in the wilderness of Maria Island

Roadtrip down the Great Ocean Road

Cruise the Kimberley in the wet season

See all of the places on the Australian National Heritage List

Pootle down the Murray on a paddleboat

Visit Europe without a passport in the Barossa

Drive across the Nullabor

Find a waterfall by chopper at Bullo River Station

Witness the Aurora Australis in Tasmania

Uncover bones at the Age of Dinosaurs Museum

Soak up the spectacular Flinders Ranges

Ride in a camel train along Cable Beach

Have a barbie with friends on the beach

Attend a cricket match at the MCG

Visit the Shrine of Remembrance

Visit the Australian Centre for the Moving Image

Take a road trip from Darwin to Adelaide

Go to the Australian Stockman's Hall of Fame

Get stranded on Wilson Island

See the flood plains of the Mary River wetlands

Take the ferry to Manly Beach

Visit the National Gallery of Australia

Visit the Dog on the Tuckerbox

Tick off all the Luxury Lodges of Australia

Be the first in Australia to see the sunrise

Hike the Bay of Fires Trail

Camp in the Australian Outback

Drink wine in the Yarra Valley

Rev yourself up on the Outback Trailblazer

Hike in the Daintree Rainforest

Take a ride on the Melbourne Star

See the Southern Lights in Tasmania

See something big at the MCG

Traipse through the Tarkine

Conquer the sand dunes of the Simpson

Visit the Tasmanian Museum of Old

See something big at the Melbourne Cricket Grounds

See Tassie devils in the wild

Swim with the sharks at Exmouth

Attend a match at the MCG

Walk across the Simpson Desert

Visit the Museum of Human Disease

Attend a State of Origin game

Visit the Museum of Old and New Art

Look into the convict past at Port Arthur

Tackle the ‘tracks’ by 4WD

Visit the Stockman’s Hall of Fame 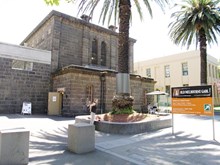 Old Melbourne Gaol
The Old Melbourne Gaol is a museum and former prison located in Russell Street, Melbourne, Victoria, Australia. It consists of a bluestone building and courtyard, and is located next to the old City Police Watch House and City Courts buildings. It was first constructed starting in 1839, and during its operation as a prison between 1845 and 1924, it held and executed some of Australia's most notorious criminals, including bushranger Ned Kelly and serial killer Frederick Bailey Deeming. 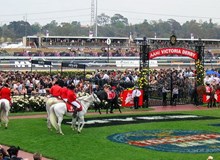 Melbourne Cup
The Melbourne Cup is Australia's major Thoroughbred horse race. Billed as The race that stops a nation, it is a race for three-year-olds and over, over a distance of 3,200 metres. It is the richest and most prestigious "two-mile" handicap in the world, and one of the richest turf races in the world. The event is held at around 3 pm on the first Tuesday in November by the Victoria Racing Club, on the Flemington Racecourse in Melbourne.

Arnhem Land
Made up of 91,000 square kilometres of tropical wilderness, Arnhem Land is as unspoiled and remote as you can get. Its small population is predominantly Aboriginal people, whose traditional culture remains largely intact, making it a huge tick on our bucket list. Access to Arnhem Land is so restricted that only selected tour operators who have earned the trust of traditional landowners may bring visitors in.

Swim with whale sharks on Ningaloo Reef
On Western Australia’s Coral Coast at Ningaloo Reef you can partake in the underwater experience of a lifetime. Every year, between mid-March and mid-July, these gentle giants of the ocean congregate in the Ningaloo Marine Park following the mass spawning of coral. They can grow up to 18 metres in length but are completely harmless to humans. 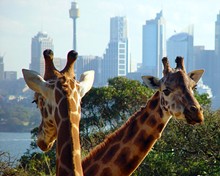 Taronga Zoo Sydney
Taronga Zoo is the city zoo of Sydney, New South Wales, Australia. Officially opened on 7 October 1916, it is located on the shores of Sydney Harbour in the suburb of Mosman. Divided into eight zoogeographic regions, Taronga Zoo is home to over 2,600 animals on 21 hectares (52 acres), making it one of the largest of its kind.

The Pinnacles at Nambung National Park
“
The peculiar pinnacles at Nambung National Park, Western Australia - These amazing natural limestone structures, some standing as high as five metres, were formed approximately 25,000 to 30,000 years ago after the sea receded and left deposits of sea shells. Over time, coastal winds removed the surrounding sand leaving the pillars exposed."

Drive the Great Ocean Road
Hire a car in Melbourne and take a journey along the country’s stunning south-east coastline. Drive through the iconic surf spots of Torquay and Bells Beach, then onto the laidback town of Lorne and the spectacular Twelve Apostles. 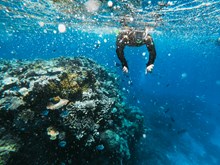 Go to the Great Barrier Reef

Spend a few days at a Great Barrier Reef island

Snorkel in the Great Barrier Reef