7 people have been here. 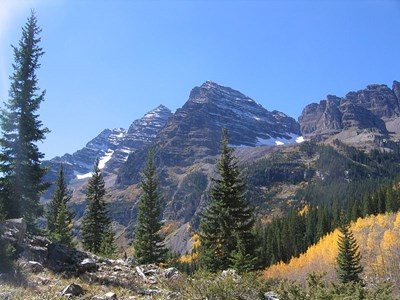 ABOUT COLORADO
Colorado is a U.S. state that encompasses most of the Southern Rocky Mountains as well as the northeastern portion of the Colorado Plateau and the western edge of the Great Plains. Colorado is part of the Western United States, the Mountain States, and the Southwestern United States. The origins of Colorado's name come from the Spanish language, when the Spanish first called the area "Colorado" because of its red colored earth. The translation of "red colored" was Colorado.
Popular Goals

Rocky Mountain National Park is a national park located in the north-central region of the U.S. state of Colorado. It features majestic mountain views, a variety of wildlife, varied climates and environments—from wooded forests to mountain tundra—and easy access to back-country trails and campsites. The park is located northwest of Boulder, Colorado, in the Rockies, and includes the Continental Divide and the headwaters of the Colorado River. The park has five visitor centers.

The City and County of Denver is the capital and the most populous city of the U.S. state of Colorado. Denver is a consolidated city-county, located in the South Platte River Valley on the High Plains, just east of the Front Range of the Rocky Mountains. The Denver downtown district is located immediately east of the confluence of Cherry Creek with the South Platte River, approximately 12.8 miles (21 km) east of the foothills of the Rocky Mountains.

Visit Colorado Springs
Colorado Springs is a Home Rule Municipality that is the county seat and most populous city of El Paso County, Colorado, United States. It is situated on Fountain Creek and is located just east of the geographic center of the state and 61 miles (98 km) south of the Colorado State Capitol in Denver. At 6,035 feet the city sits over one mile above sea level, though some areas of the city are significantly higher.

Visit Garden of the Gods National Forest
The Shawnee National Forest, located in the Ozark and Shawnee hills of Southern Illinois, consists of approximately 280,000 acres (1,100 km²) of federally managed lands. In descending order of land area it is located in parts of Pope, Jackson, Union, Hardin, Alexander, Saline, Gallatin, Johnson, and Massac counties. Forest headquarters are located in Harrisburg, Illinois. There are local ranger district offices in Jonesboro and Vienna.

The City of Aspen is a Home Rule Municipality that is the county seat and the most populous city of Pitkin County, Colorado, United States. The United States Census Bureau placed the city's population at 6,658 in 2010. Founded as a mining camp in the Colorado Silver Boom and named because of the abundance of aspen trees in the area, the city is now a ski resort and an upscale tourist center.

Walk across the Royal Gorge Bridge

Visit the Museum of Nature and Science

Visit Garden of the Gods

Climb to the top of the Manitou Incline

Visit Cave of the Winds

Bike From Durango to Moab

Visit all the National Parks in the state of Colorado

Climb the Diamond on Longs Peak

Visit the Children's Museum of Denver

Bag Fourteeners in the Weminuche Wilderness

Visit the Canyons of the Ancients National Monument

Visit the Denver Museum of Art

Drive to the summit of Pike's Peak

Stay in a cabin in San Juan National Forest

Take a ride on the Durango

Go to the Louisville Street Fair 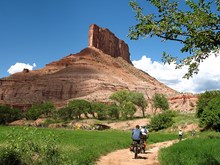 Bike From Durango to Moab
“
Connect the dots (six spare but well-outfitted huts spaced approximately 35 miles/56 kilometers apart) on a weeklong mountain bike expedition that starts in the jagged San Juan Mountains and ends in Moab. Harder and more isolated than its twin, the venerable Telluride-Moab ride, the 215-mile (346-kilometer) Durango-Moab route presents navigational and bike-handling challenges and a sense of unfettered freedom." 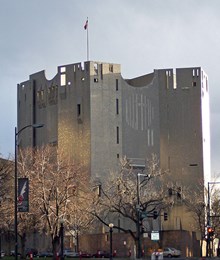 Denver Art Museum
The Denver Art Museum is an art museum in Denver, Colorado located in Denver's Civic Center. It is known for its collection of American Indian art, and has a comprehensive collection numbering more than 68,000 works from across the world. 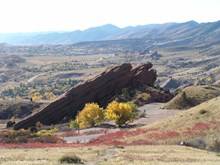 Red Rocks
Red Rocks Park is a mountain park in Jefferson County, Colorado, owned and maintained by the city of Denver as part of the Denver Mountain Parks system. The park is known for its very large red sandstone outcrops. Many of these rock formation within the park have names, from the mushroom-shaped Seat of Pluto to the inclined Cave of the Seven Ladders. The most visited rocks, around the amphitheatre, are Creation Rock to the north, Ship Rock to the south, and Stage Rock to the east.

Colorado
Colorado is a U.S. state that encompasses most of the Southern Rocky Mountains as well as the northeastern portion of the Colorado Plateau and the western edge of the Great Plains. Colorado is part of the Western United States, the Mountain States, and the Southwestern United States. The origins of Colorado's name come from the Spanish language, when the Spanish first called the area "Colorado" because of its red colored earth. The translation of "red colored" was Colorado. 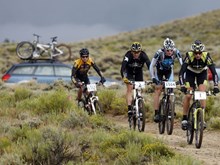 The Leadville Trail 100
“
Leadville was always the epicenter of the core endurance mountain biking race scene, but when Lance Armstrong started competing—and winning—the Leadville Trail 100 Mountain Bike Race, a hundred-mile (161-kilometer), high-altitude sufferfest, it became the showcase race of mountain biking pain. The course is so hard that even the mighty Armstrong was humbled the first time he raced it (in 2008), when Colorado local and six-time champion Dave Wiens beat him by two minutes." 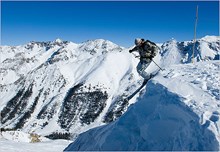 Ski Scar Face
“
The Scar Face run is notorious among skiers at Silverton Mountain and that’s saying something as the whole mountain is geared up for only the most skilled and courageous skiers. Such is its reputation for difficulty that fewer than ten skiers a year even attempt it, with locals stating that ‘Scar Face’ is a prediction rather than a description. Interested? Well, we certainly were, that’s the sort of challenge we can’t resist." 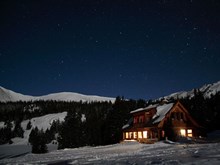 Backcountry Ski the 10th Mountain Division Huts
“
Colorado’s 10th Mountain Division Huts are the fruits of one man’s crazy idea: Fritz Benedict, a 10th Mountain Division soldier who fought in World War II and an Aspen architect, dreamed of setting up a system of winter huts to rival the Alps’ Haute Route. The results arguably outdid the Europeans at their own game. Today, the system, located on the division’s former training grounds between Aspen, Vail, and Leadville, is 14 huts strong and connects to another 17 in the area. Linked with 300-plus miles (483-plus kilometers) of skiable routes, it’s the largest system of its kind on the continent." 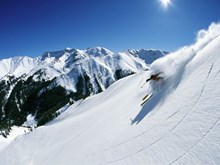 Ski Silverton Mountain
“
If the Wild West is still alive, it’s no more obvious than at Silverton Mountain. This scruffy mom-and-pop ski area is the country’s premier antiresort. The low-speed, two-person chairlift, the old laundry trucks they use as shuttles, and the wood-stove-heated base yurt are your first clues as to the owners’ no-nonsense philosophy: It’s all about the skiing. And skiing there is." 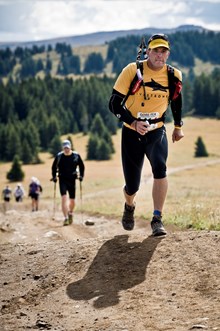 TransRockies Colorado
“
The TransRockies six-day stage race from Buena Vista to Beaver Creek is the most spectacular and difficult trail run in the country. For pros, there’s a purse ($20K). For the rest of us, there’s a boast-worthy vacation: 113 miles (182 kilometers) and 18,000 feet (5,486 meters) of elevation gain, all above 7,500 feet (2,286 meters) amid grandiose ruggedness." 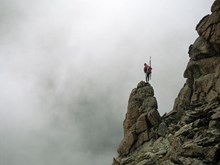 The Diamond on Longs Peak
“
In general, Colorado’s famed fourteeners—the state’s 54 peaks over 14,000 feet (4,267 meters) tall—are pretty easy to climb. This makes the east face of 14,259-foot (4,346-meter) Longs Peak in Rocky Mountain National Park, which serves up the biggest buffet of multipitch, big-wall routes this side of Yosemite, even more of a prize. The east face’s sheer, 2,000-foot-high (609-meter-high) Diamond is a true, big mountain adventure that requires confidence in climbing 5.10 rock and the guts to sleep out in a portaledge."