3 people have been here. 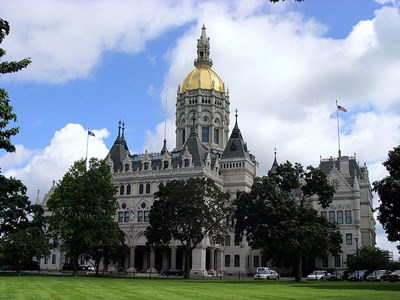 ABOUT CONNECTICUT
Connecticut is a state in the New England region of the northeastern United States. It is bordered by Rhode Island to the east, Massachusetts to the north, and New York to the west and south (because various islands of New York span Connecticut's entire coast).
Popular Goals

Visit Mystic Aquarium
The Mystic Aquarium & Institute for Exploration is an aquarium and oceanography institute in Mystic, Connecticut. The Aquarium is one of only four U.S. facilities nation where people can see Steller sea lions and has one of the largest outdoor Beluga Whale exhibits in the United States. It is also among the first aquariums to attempt artificial insemination on a Beluga Whale. Some other exhibits include a ray touch pool, a penguin exhibit, and a bat cave.

Visit Old Newgate Prison
Old Newgate Prison was a Colonial American prison in what is now East Granby, Connecticut. It is now a historic site. The prison was originally a copper mine, opened in 1705, and is believed to be the first copper mine in America. After mining operations proved unprofitable, the colony of Connecticut converted it to a prison, like its London namesake Newgate Prison. The first prisoner, John Hinson, was committed for burglary in 1773.

Foxwoods Resort Casino is a hotel-casino in Ledyard, Connecticut on the Mashantucket Pequot Indian Reservation. Together with the MGM Grand at Foxwoods, it is one of the largest casino complexes in the world in terms of floor space for gaming. The entire resort comprises 4,700,000 sq ft (440,000 m) of space. The casino has over 380 gaming tables including blackjack, craps, roulette, and poker. Foxwoods also has the most slot machines of any casino in the world, numbering 6,300.

Silver Sands State Park is a Connecticut State park in Milford, Connecticut, USA which offers facilities for swimming in the Long Island Sound, picnicking, trails, boardwalks and opportunities for bird-watching. It includes the 14-acre (57,000 m) bird sanctuary of Charles Island, which is rumored to be the site of Captain Kidd's buried treasure. Silver Sands is adjacent to the city-owned park, Walnut Beach.

Visit Hammonasset Beach State Park
Hammonasset Beach State Park is a state park located in Madison, a town in New Haven County, Connecticut, United States. It is Connecticut's largest shoreline park, with over two miles of beach. Activities include bicycling, boating, fishing, hiking, picnicking and swimming. The park has over 550 campsites available. The Meigs Point Nature Center offers programs and activities for park visitors on a limited year round basis.

Attend the Potato and Corn Festival in North Branford

Attend the International Festival of Arts and Ideas

Drive through the Litchfield Hills in the fall

Eat a pizza at Pepe's Pizza in New Haven

Take a tour of Gillette Castle

Eat a hamburger at Louis Lunch in New Haven

Backpack the Appalachian trail through Connecticut

Visit the Governor's Residence in Hartford

Attend a concert at Infinity Hall in Norfolk

Visit the Bruce Museum of Art and Science

Watch a play at TheaterWorks in Hartford