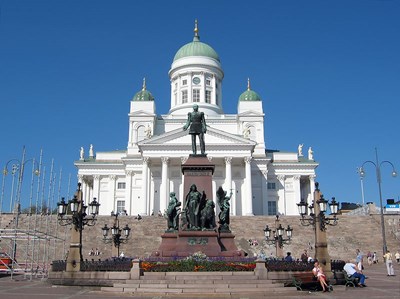 ABOUT FINLAND
Finland (Finnish: ''Suomi'', Swedish: ''Finland'') is in Northern Europe and has borders with Russia to the east, Norway to the north, and Sweden to the west. The country is a thoroughly modern welfare state with well-planned and comfortable small towns and cities, but still offers vast areas of unspoiled nature. Finland has approximately 188,000 lakes (about 10% of the country) and a similar number of islands. In the northernmost part of the country the Northern Lights can be seen in the winter and midnight sun in the summer. Finns also claim the mythical mountain of ''Korvatunturi'' as the home of Santa Claus, and a burgeoning tourist industry in Lapland caters to Santa fans. Despite living in one of the most technologically developed countries in the world, the Finns love to head to their summer cottages in the warmer months to enjoy all manner of relaxing pastimes including sauna, swimming, fishing and barbecuing.
Popular Goals

Helsinki is the capital and largest city in Finland. It is in the southern part of Finland, in the region of Uusimaa/Nyland, on the shore of the Gulf of Finland, by the Baltic Sea. The population of the city of Helsinki is 584,420, making it the most populous municipality in Finland by a wide margin. Helsinki is located some 400 kilometres (250 mi) east of Stockholm, Sweden, 300 kilometres (190 mi) west of St. Petersburg, Russia and 80 kilometres (50 mi) north of Tallinn, Estonia.

Stay in an Glass Igloo at the Kakslauttanen Arctic Resort

Spot reindeers at Lapland
Lapland is the largest and northernmost of the regions of Finland. The municipalities in the province cooperate in a Regional Council. It borders the Region of North Ostrobothnia in the south. It also borders the Gulf of Bothnia, Norrbotten County in Sweden, Finnmark County and Troms County in Norway as well as Murmansk Oblast in Russia.

Witness the Northern Lights during a polar night in Finland

Explore Helsinki
Helsinki is the capital and largest city in Finland. It is in the southern part of Finland, in the region of Uusimaa/Nyland, on the shore of the Gulf of Finland, by the Baltic Sea. The population of the city of Helsinki is 584,420, making it the most populous municipality in Finland by a wide margin. Helsinki is located some 400 kilometres (250 mi) east of Stockholm, Sweden, 300 kilometres (190 mi) west of St. Petersburg, Russia and 80 kilometres (50 mi) north of Tallinn, Estonia.

Suomenlinna, until 1918 Viapori, or Sveaborg, is an inhabited sea fortress built on six islands (Kustaanmiekka, Susisaari, Iso-Mustasaari, Pikku-Mustasaari, Länsi-Mustasaari and Långören), and which now forms part of the city of Helsinki, the capital of Finland. Suomenlinna is a UNESCO World Heritage site and popular with both tourists and locals, who enjoy it as a picturesque picnic site.

Visit Santa Claus at Rovaniemi
Rovaniemi is a city and municipality of Finland. It is the administrative capital and commercial centre of Finland's northernmost province, Lapland. It is situated close to the Arctic Circle and is between the hills of Ounasvaara and Korkalovaara, at the confluence of the Kemijoki River and its tributary, the Ounasjoki. The city and the surrounding Rovaniemen maalaiskunta (Rural municipality of Rovaniemi) were consolidated into a single entity on January 1, 2006.

Spend a night at the Lumi Linna Snow Hotel in Kemi

Savour a plate of Pullat with coffee, a local tea-time tradition

Experience the glass igloos of Kakslauttanen in Saariselkä

Learn about Sámi culture at Inari

Go trekking in one of Finland’s classing trekking routes

Stroll around the Siida museum and the wilderness church in Inari

Spend the Finnish midsummer in a mökkit (summer cottage)

Go cross-country skiing in the winter

Drink at a floating ‘boat bar’ on Aurajoki River in Turku

Go snowboarding in the hills of Lapland

Spend the day at the Jätkänkämppä smoke sauna just outside Kuopio

Climb to the village of Kilpisjärvi

See the Alvar Aalto at Jyväskylä

Go on an architecture tour of Helsinki

Raft the rapids of Kukkolankosi

Dog-sled across the snows of Harriniva

Catch a sunset over the waters at Lakeland

Climb the Saana Fell or Haltia Fell, the highest peak in Finland

Discover the quaint wooden villages of Jakobstad and Kristinestad

Visit the Observatory of Helsinki

Go ice-fishing with a bottle of Kossu (vodka), a Finnish tradition

Eat a plate of Kalakukko and Karjalanpiirakka in a local restaurant

Spend the day at the beaches in Pohjanmaa
Cities 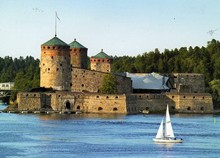 Olavinlinna Castle
“
Olavinlinna is a 15th century three-tower castle located in Savonlinna, Finland. It is the northernmost medieval stone fortress still standing.The fortress was founded by Erik Axelsson Tott in 1475 under the name Sankt Olofsborg in an effort to profit from the political turmoil following Ivan III’s conquest of the Novgorod Republic. It was sited in Savonia so as to lay claim to the Russian side of the border established by the Treaty of Nöteborg."

Suomenlinna Fortress
“
Situated on six islands off Helsinki, Suomenlinna was built in 1748 as protection against Russian expansionism. Sweden started construction on the fortress when Finland was still a part of the Swedish crown. No longer used as a military base, Suomenlinna was turned over to civilian administration in 1973 and stands today as a UNESCO World Heritage Site."