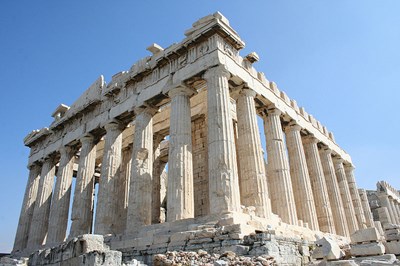 ABOUT GREECE
Greece is a country in Southern Europe, on the southernmost tip of the Balkan peninsula, with extensive coastlines and islands in the Aegean, Ionian, and Mediterranean Seas. It shares borders in the north with Albania, the Republic of Macedonia (FYROM), Bulgaria, and Turkey. It has an ancient culture that has had a significant influence on the arts, language, philosophy, politics, and sports of western society, including the genres of comedy and drama, western alphabets, Platonic ideals and the Socratic method, democracies and republics, and the Olympics.
Source: Wikipedia
Popular Goals

The Parthenon is a temple in the Athenian Acropolis, Greece, dedicated to the Greek goddess Athena, whom the people of Athens considered their protector. Its construction began in 447 BCE and was completed in 438 BCE, although decorations of the Parthenon continued until 431 BCE. It is the most important surviving building of Classical Greece, generally considered to be the culmination of the development of the Doric order.

Santorini, also known as Thera is a volcanic island located in the southern Aegean Sea, about 200 km (120 mi) southeast from Greece's mainland. It is the largest island of a small, circular archipelago which bears the same name. It forms the southernmost member of the Cyclades group of islands, with an area of approximately 73 km (28 sq mi) and a 2001 census population of 13,670. It is composed of the Municipality of Thira (pop. 12,440) and the Community of Oía (Οία, pop.

Visit the Acropolis in Athens

Visit the Acropolis in Greece
Acropolis means "highest city" in Greek, literally city on the extremity and is usually translated into English as Citadel (akros, akron, edge, extremity + polis, city, pl. acropoleis). For purposes of defense, early people naturally chose elevated ground to build a new settlement, frequently a hill with precipitous sides. In many parts of the world, these early citadels became the nuclei of large cities, which grew up on the surrounding lower ground, such as modern Rome.

Greece has a large number of islands, with estimates ranging from somewhere around 1,200 to 6,000, depending on the minimum size to take into account. The number of inhabited islands is variously cited as between 166 and 227. Only 78 of them have more than 100 inhabitants. The largest Greek island by area is Crete, located at the southern edge of the Aegean Sea.

The Mid-Autumn Festival, also known as the Moon Festival or Mooncake Festival or Zhongqiu Festival, is a popular lunar harvest festival celebrated by Chinese and Vietnamese people. A description of the festival first appeared in Rites of Zhou, a written collection of rituals of the Western Zhou Dynasty from 3,000 years ago. The celebration became popular during the early Tang Dynasty.

Watch the sunset over Santorini’s rooftops
Festivals and Events

Watch a classical Greek drama at the amphitheatre in Epidaurus (UNESCO)

Stroll around the Thessaloniki Book Fair

Participate in the Apokries Carnival

Participate in the Hellenic Festival in Athens

Celebrate Assumption Day on the island of Tinos
Other Goals

Watch the sunset over Santorini’s rooftops

Learn about Greek Mythology at the Temple of Zeus in Olympia

Explore the ruins of Knossos, a 3000 year old Minoan Palace

Glimpse at the Parthenon in Athens

Unwind on a one-week sailing trip around Greece

Take a dip in one of the thermal springs in Greece

Drink a cup of Greek Coffee

Visit the monasteries of Meteora

Discover the birth place of the Olympic Games, Olympia (UNESCO)

Scuba-dive off the coast of Greece

Pay a visit to the Heraeum, the Stadium and the Hippodrome at Olympia

Relax at a tavern in Corfu

Try Retsina, a wine made with pine-needle resin

Unwind in the golden sands of Koukounaries on Skiathos

Go on a pub crawl in Mykonos

Collect white pebbles near the waters of Myrtos

Walk on the black sand beaches of the Cyclades

Watch a sunset in Santorini

Sip a glass of Metaxa

Visit Mycenae citadel on the Peloponnese

Stroll down to the Ancient Agora in Athens

Go sailing on the turquoise waters of the Ionian

Find the Mask of Agamemnon and Nestor’s Cup in Mucenae

Visit the excavation museum near Epidaurus

Eat a gyro in Greece

Run in the Athens Marathon

Sail around the Greek Isles

Eat at a starlit local restaurant at Monemvasia

Pay a visit to the Archaeological Museum in Iraklio

See the New Fortress at Corfu

Attend a beach party at Psarou on Mykonos

Walk on fire during the Anastenaria Firewalking Festival

Catch sight of the Mosque of Soliman in Rhodes

Discover Meteora, a group of monasteries after Mount Athos

Visit the Sanctuary of Asklepios at Epidaurus

Slow down in the old fortified Byzantine town of Monemvasia

See the Sanctuary of Asclepius at Epidaurus, an old religious and healing centre (UNESCO)

Visit the Palace of the Grandmaster of the Knights, Rhodes City

Go spelunking in Perama, a karst cave in Crete

Take in the views at Lake Plastira in Kardista

See the palm grove near the beach of Vai on Crete

See the Great Hamam in Rhodes

See the Acropolis in Athens

Bird-watch at the Prespa Lakes in Macedonia

Visit the Archaeological Sites of Mycenae and Tiryns

Go bird-watching in the Nestos Delta in Thrace 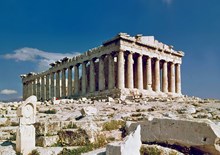 Athens
Athens, the capital and largest city of Greece, dominates the Attica periphery; as one of the world's oldest cities, its recorded history spans around 3,400 years. 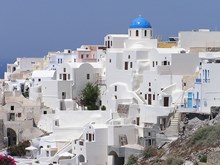 Santorini
Santorini, also known as Thera is a volcanic island located in the southern Aegean Sea, about 200 km (120 mi) southeast from Greece's mainland. It is the largest island of a small, circular archipelago which bears the same name.

August Moon Festival
“
August is the month when Athens is full of cheers. Of the festivities of Athens in the month of August, the Full Moon festival holds a special attraction. During this festival, both locales and tourists are allowed free entry to the city’s major monuments, museums and archaeological sites."

The Hellenic Festival
“
The Hellenic Festival organised in the Herodes Atticus theatre of Athens is the most joyous celebration of Greekness following a string of performances: opera, ballet, classical music & dance, jazz and theatre shows. Artistes from across the world participate in this festival to showcase their talents."

Participate in the Hellenic Festival in Athens
Source: flybee.com 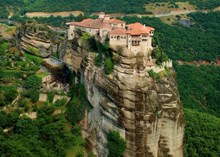 Visit the monasteries of Meteora
“
'Suspended in the air' (the meaning of Meteora in Greek), these monasteries represent a unique artistic achievement and are one of the most powerful examples of the architectural transformation of a site into a place of retreat, meditation and prayer. The Meteora provide an outstanding example of the types of monastic construction which illustrate a significant stage in history, that of the 14th and 15th centuries when the eremitic ideals of early Christianity were restored to a place of honor by monastic communities."