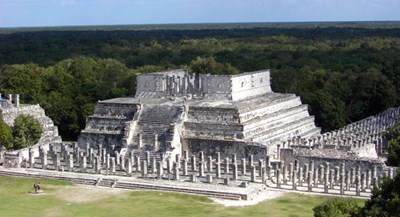 ABOUT MEXICO
Mexico is one of the most popular tourist countries on earth. Much of the tourist industry is centered around the beach resorts as well as the altiplano in the central part of the country. Visiting the northern interior allows visitors to get off the beaten path a bit. American tourists tend to predominate on the Baja peninsula and the more modernized beach resorts (Cancún, Puerto Vallarta), while European tourists congregate around the smaller resort areas in the south like Playa del Carmen and colonial towns San Cristobal de las Casas.
Source: Wikitravel
Popular Goals

Explore the Maya temples of Palenque

Palenque was a Maya city state in southern Mexico that flourished in the seventh century CE. After its decline it was absorbed into the jungle, but has been excavated and restored and is now a famous archaeological site attracting thousands of visitors. It is located near the Usumacinta River in the Mexican state of Chiapas, located about 130 km south of Ciudad del Carmen about 150 meters above sea-level.

Day of the Dead (Spanish: Día de los Muertos) is a Mexican holiday celebrated throughout Mexico and around the world in other cultures. The holiday focuses on gatherings of family and friends to pray for and remember friends and family members who have died. It is particularly celebrated in Mexico, where it attains the quality of a national holiday, and all banks are closed.

Mexico City is the capital and largest city in Mexico as well as the largest city in the Americas and the world's third largest metropolitan area by population, after Seoul and Tokyo. Mexico City is also the Federal District (Distrito Federal), the seat of the federal government. It is a federal entity within Mexico which is not part of any one of the 31 Mexican states but belongs to the federation as a whole.

Chichen Itza is a large pre-Columbian archaeological site built by the Maya civilization located in the northern center of the Yucatán Peninsula, in the Yucatán state, present-day Mexico. Chichen Itza was a major focal point in the northern Maya lowlands from the Late Classic through the Terminal Classic and into the early portion of the Early Postclassic period.

Attend the Day of the Dead celebrations

Day of the Dead (Spanish: Día de los Muertos) is a Mexican holiday celebrated throughout Mexico and around the world in other cultures. The holiday focuses on gatherings of family and friends to pray for and remember friends and family members who have died. It is particularly celebrated in Mexico, where it attains the quality of a national holiday, and all banks are closed.

Mérida (T'hó' or Ichkanzihóo in Modern Maya) is the capital and largest city of the Mexican state of Yucatán and the Yucatán Peninsula. It is located in the northwest part of the state, about 35 km (22 miles) from the Gulf of Mexico coast. The city is also the municipal seat of the Municipality of Mérida, which includes the city and the areas around it. According to the 2005 census, the population of Mérida was 734,153, ranking 12th among the most populous Mexican metropolitan areas.

The historic center of Mexico City is also known as the "Centro" or "Centro Histórico. " This neighborhood is focused on the Zócalo or main plaza in Mexico City and extends in all directions for a number of blocks with its farthest extent being west to the Alameda Central The Zocalo is the largest plaza in Latin America and the second largest in the world after Moscow’s Red Square. It can hold up to nearly 100,000 people.
Festivals and Events

Attend the Day of the Dead celebrations

Celebrate the Day of the Dead in Mexico

Attend the Carnaval in Veracruz or La Pax

Watch a Christmas pastorela at Tepotzotlan
Other Goals

Visit the Pre-Hispanic City of Teotihuacan

Visit the Gulf of California

Visit the Historic Centre of Oaxaca

Slip across the border in Tijuana

Visit the Pre-Hispanic City and National Park of Palenque

Take a ferry across to Isla Cozumel

Bathe in a cenote (a deep natural sinkhole) in the Yucatan

Visit the Historic Centre of Zacatecas

Visit the Historic Town of Guanajuato

Drink a margarita in Mexico

Bungee jump off the cliffs at Matacanes

Visit the Prehistoric Caves of Yagul and Mitla

Visit the Archeological Zone of Paquimé

See the Historic Monuments of Tlacotalpan

Visit the Historic Centre of Puebla

Explore the ancestral homeland of the Aztecs in Mexcaltitan

Go to the Monarch Butterfly Reserve

Visit the Hospicio Cabañas in Guadalajara

Visit the Pre-Hispanic Town of Uxmal

Visit the Historic Centre of Morelia

Visit the Monasteries on the slopes of Popocatépetl

Learn about Mexican history at the Palacio Nacional

See the Historic Monuments of Querétaro

Visit the Sanctuary of Atotonilco

Visit the Franciscan Missions in the Sierra Gorda of Querétaro

Salsa on the coastal boulevard in Veracruz

Walk though the ruins of Paquime

Sample mezcals at the tasting salons of Condesa

Hike through cloud forests between the villages of Pueblos Mancomunados

Discover the art of the Olmecs at Villahermosa

Climb a Mayan temple in Tulum

Stroll down the side streets of Valle de Bravo

Discover the ancient sites at Xochicalo

Enjoy a sunset drink on the zocalo of Cuetzalan

Catch a sunset at the big Baja

Lay in a cabana in Riviera Maya

Explore the cliffside dwellings in the mountains of Cueva Grande

Get deep into a mine in Hidalgo del Parral

Shop for pottery in Mata Ortiz

Take a road trip on the Ferrocarril Chihuahua Pacifico

Party with the students in Guanajuato

Go fishing in the gulf waters around Barra del Tordo

Snorkel through the desert pools of Cuatrocienegas

Visit the National Museum of Anthropology

Visit the Historic Monuments of Querétaro

Visit the Historic Monuments of Guanajuato

Climb the Angel of Independence

Spot a cougar in the Sierra de la Laguna
Cities

Santiago de Tequila
The town of Santiago de Tequila was founded in 1530 by Franciscan monks on the orders of Fray Juan Calera. In 1600 was established the first distillery of agave, which was previously consumed but not distilled, creating like this the first tequila factory itself. 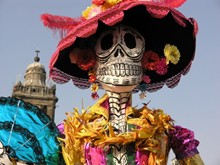 Day of the Dead
Celebrated in May every year, Day of the Dead focuses on gatherings of family and friends to pray for and remember friends and family members who have died. It is particularly celebrated in Mexico, where it attains the quality of a National Holiday, and all banks are closed.

Attend the Day of the Dead celebrations
Source: latinamericanstudies.org

Río Secreto
“
Rio Secreto is also known as Mexico’s underground river. While just recently becoming a tourist destination, it’s likely that Río Secreto patrons will only grow. After all, with its thousands of stalactites and stalagmites along the river’s edge, visitors are left feeling as if they have traveled back in time, and to a place untouched by human hands. The underground passageways of seemingly endless tunnels stun the senses and will absolutely take your breath away."

Explore the Maya temples of Palenque 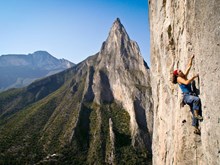 Climb El Potrero Chico
Part of the appeal of Potrero Chico is, put simply, the easy—and cheap—living. By day, climbers ascend spires like Crash Test Dummies, an exposed two-pitch 5.9 with an enviable view over the verdant valley at the top. Come evening, they buy fresh veggies and fruit at the local markets, then gather in campgrounds like La Posada to cool off in the pool, share stories, and drink margaritas in the shade.