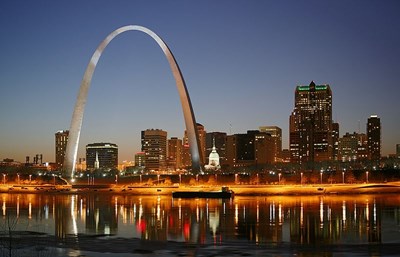 ABOUT MISSOURI
Missouri (abbreviated MO) is a U.S. state located in the Midwestern United States, bordered by Iowa, Illinois, Kentucky, Tennessee, Arkansas, Oklahoma, Kansas and Nebraska. With a 2009 estimated population of 5,987,580, Missouri is the 18th most populous state in the nation and the fifth most populous in the Midwest. It comprises 114 counties and one independent city. Missouri's capital is Jefferson City. The four largest urban areas are St. Louis, Kansas City, Springfield, and Columbia.
Popular Goals

The Gateway Arch, also known as the Gateway to the West, is part of the Jefferson National Expansion Memorial in St. Louis, Missouri. It is 630 feet (192 m) wide at its base and stands 630 feet (192 m) tall, making it the tallest monument in the United States, and the tallest habitable structure in the state. It was designed by architect Eero Saarinen and structural engineer Hannskarl Bandel in 1947. Construction started on February 12, 1963, and ended on October 28, 1965, costing $13 million.

Visit the Nelson-Atkins Museum of Art

The Nelson-Atkins Museum of Art is an art museum in Kansas City, Missouri, known for its neo-classical architecture and extensive collection of Asian art. In 2007, Time magazine ranked the museum's new Bloch Building, # 1 on its list of "The 10 Best (New and Upcoming) Architectural Marvels" which considered candidates from around the globe.

The Saint Louis Zoological Park, commonly known as the St. Louis Zoo, is a zoo in Forest Park in St. Louis, Missouri. It is recognized as a leading zoo in animal management, research, conservation, and education. Admission is free based on a public subsidy from a cultural tax district, the Metropolitan Zoological Park and Museum District (ZMD); fees are charged for some special attractions.

Visit the Lake of the Ozarks
The Lake of the Ozarks is a large reservoir created by impounding the Osage River in the northern part of the Ozarks in central Missouri. Extents of three smaller tributaries to the Osage, the Niangua River, Grandglaize Creek, and Gravois Creek, are included in the impoundment. The lake has a surface area of 55,000 acres (223 km²), over 1,150 miles (1,850 km) of shoreline, and the main channel of the Osage Arm stretches 92 miles (148 km) from end to end.
Festivals and Events

Attend the Polar Bear Plunge in the Lake of the Ozarks

Visit the National World War I Museum at Liberty Memorial

Visit the Lake of the Ozarks

Visit the Museum of Westward Expansion

Visit the Toy and Miniature Museum in Kansas City

See all the fountains in Kansas City

Paddle 340 Miles of the Mighty Missouri—Nonstop

Visit the Shrine of St. Joseph

Visit the Museum of Transportation

Tour the home of Scott Joplin

Go to a St. Louis Cardinals game at Busch Stadium 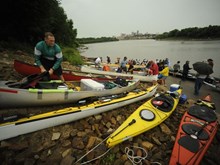 Paddle 340 Miles of the Mighty Missouri—Nonstop
“
No self-respecting river rat should resist the challenge of paddling the world’s longest nonstop river race, which traverses an entire state in three and a half days. The Missouri River 340, from Kansas City to St. Louis (technically, St. Charles) is something of a Wild West race, with few restrictions other than reasonable safety regulations (nav lights, no jousting with barges) and the need to finish within 88 hours." 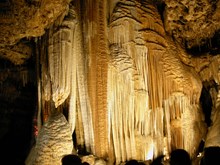 Meramec Caverns
Meramec Caverns is the collective name for a 4.6-mile (7.4 km) cavern system in the Ozarks, near Stanton, Missouri. The caverns were formed from the erosion of large limestone deposits over millions of years. Pre-Columbian Native American artifacts have been found in the caverns. Currently the cavern system is a tourist attraction, with more than fifty billboards along Interstate 44 and is considered one of the primary attractions along former U.S. Highway 66. 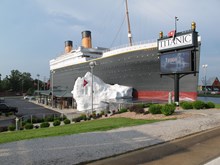