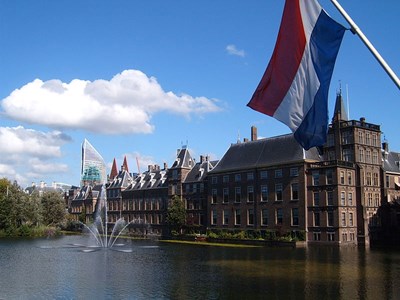 ABOUT NETHERLANDS
The Netherlands is a constituent country of the Kingdom of the Netherlands, located in North-West Europe and with territories in the Caribbean. It is a parliamentary democratic constitutional monarchy. Mainland Netherlands borders the North Sea to the north and west, Belgium to the south, and Germany to the east, and share maritime borders with Denmark, Norway and the United Kingdom. The capital is Amsterdam and the seat of government is The Hague.
Source: Wikipedia
Popular Goals

Visit Amsterdam
Amsterdam (English /ˈæmstərdæm/; Dutch: [ˌʔɑmstərˈdɑm]) is the capital city and most populous city of the Kingdom of the Netherlands. Its status as the Dutch capital is mandated by the Constitution of the Netherlands though it is not the seat of the Dutch government, which is The Hague. Amsterdam has a population of 813,562 within the city proper, 1,112,165 in the urban area and 1,575,263 in the metropolitan area. The city region has a population of 2,332,773. The city is located in the province of North Holland in the west of the country. It comprises much of the northern part of the Randstad, one of the larger conurbations in Europe, with a population of approximately 7 million.

The Anne Frank House on Prinsengracht canal in Amsterdam, the Netherlands, is a museum dedicated to Jewish wartime diarist Anne Frank, who hid from Nazi persecution with her family and four other people in hidden rooms at the rear of the building. As well as the preservation of the hiding place — known in Dutch as the Achterhuis — and an exhibition on the life and times of Anne Frank, the museum acts as an exhibition space to highlight all forms of persecution and discrimination.

The Rijksmuseum Amsterdam or Rijksmuseum is a Dutch national museum in Amsterdam, located on the Museumplein. The museum is dedicated to arts, crafts, and history. It has a large collection of paintings from the Dutch Golden Age and a substantial collection of Asian art. It also displays the stern of the HMS Royal Charles which was captured in the Raid on the Medway.

Rotterdam is a city and municipality in the Dutch province of South Holland, situated in the west of the Netherlands. The municipality is the second largest in the country, with a population of 603,425 as of March 2010.

Visit the sex museum in Amsterdam

The Sexmuseum or the Temple of Venus (Dutch: Venustempel) is a sex museum located in Amsterdam, Netherlands. The museum opened in 1985. It had 675,000 visitors in 2015, making it one of the most visited museums in the Netherlands. The museum features an extensive collection of pictures, recordings, photos, paintings and artifacts which allow visitors to explore the evolution of human sexuality throughout the ages.

Efteling is the largest theme park in The Benelux, and as it opened in 1952, it is one of the oldest theme parks in the world. Efteling is located in the town of Kaatsheuvel, in the municipality of Loon op Zand, and has received over 100 million visitors. In 1992 Efteling received the IAAPA Applause Award for Best Amusement Park in the World. Originally the park catered towards children with a fairy tale theme.

The Amsterdam Pride is an annual gay festival in the centre of Amsterdam, organized in the first weekend of August. With several hundreds of thousands visitors this event is one of the largest public events of the Netherlands. The pride is organized since 1996. The peak of the festival is during the canal parade, a parade of boats of large variety on the first Saturday of August, which usually goes from Westerdok over the Prinsengracht, Amstel river, Zwanenburgwal and Oudeschans to Oosterdok.

Keukenhof, also known as the Garden of Europe, is situated near Lisse, Netherlands, and is the world's largest flower garden. According to the official website for the Keukenhof Park, approximately 7,000,000 (seven million) flower bulbs are planted annually in the park, which covers an area of 32 hectares. Keukenhof is located in South Holland in the small town of Lisse, south of Haarlem and southwest of Amsterdam. It is accessible by bus from the train stations of Haarlem, Leiden and Schiphol.
Festivals and Events

Participate in the Queen’s Day Celebrations in Amsterdam

See the Parade of Saint Nicholas

Watch documentaries at the International Documentary Festival in Amsterdam

See the Bulb District Flower Parade from Noordwijk to Haarlem

Run in the Amsterdam Marathon

Participate in the Maastricht Carnival

Attend the Peter the Great exhibition at the Hermitage Amsterdam

Listen to the bands at The Hague Jazz festival

Participate in the King’s Day (Koningsdag) Celebrations in Amsterdam

Witness experimental theatre at the Over Het IJ Festival
Other Goals

Try a weed cookie in one of the cafes at Amsterdam

Explore Vondelpark in the summer

Skate on the frozen canals of Amsterdam in the winter

Have a plate of Poffertjes with your afternoon tea

Take a candlelit cruise along the canals of Amsterdam

Drink a bottle of Amstel beer

Browse through the paintings of the Dutch masters at the Rijksmuseum

Visit the House of Bols

Enjoy the spectacle of one of Holland's cheese markets

Wander around The Hague, the seat of Dutch government and royalty

Climb the tower of the 14th-century Dom (cathedral)

Go on a picnic to Vondelpark

Visit the flea markets at Albert Cuypmarkt at Pijp

Stroll around the canals of Utrecht

Hike the mud flats at low tide at Waddeneilanden

Explore the Waddeneilanden, an island chain off the coast of Friesland

Take a trip to the Hoge Veluwe National Park near Arnhem

Spend the day at Zandvoort beach in Haarlem

Cycle across the Afsluitdijk

Visit the museum dedicated to the work of Dick Bruna, creator of Miffy

Stroll through the NEMO Museum on the banks of the IJ

Explore the caves in the hills around Maastricht

Stroll around the historic city of Gouda following the Cheese Map

Take a stroll through the secluded Begijnhof garden

Visit the torture museum in Amsterdam

See the cheese market at Waagplein in Alkmaar

Step back into history at Zaanse Schans village outside Amsterdam

See the masterpieces of Rembrandt van Rijn at De Lakenhal

Capture the views from the lookout point halfway across the Afsluitdijk

Stroll through the underground museum at Hoge Veluwe National Park

Cycle through the Netherlands

Visit every province in the Netherlands

See the medieval architecture of the fortified city of Maastricht

Ride the high-speed lift up Euromast in Rotterdam

Take a book and sit on the Museumplein

Catch a glimpse of the basilica of Our Lady and St. Servatius

Take a canal tour in Amsterdam

Take a trip to Arnhem, the scene of ‘Operation Market Garden'

Visit one of Amsterdam's diamond traders

Visit the Rijksmuseum in Amsterdam

Eat a raw herring like a local at Altena

Stroll around the historic area of Willenstad, Inner City and Harbour, Curaçao (UNESCO)

Watch the Feyenoord play at the De Kuip stadium in Rotterdam

Visit the Windmills of Kinderdijk

Visit the Weighhouse Museum in Gouda

Watch the typical Dutch performing arts at the Holland Festival

Visit the Museum of Bags and Purses

Watch a football match at PSV's Philips Stadion in Eindhoven

Visit the Royal Palace of Amsterdam

Ascend to 185m with the Euroscoop experience

Spot the street art of the ‘guerilla poet” Laser 3.14 at Amsterdam 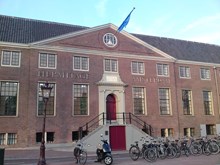 Attend the Peter the Great exhibition at the Hermitage Amsterdam 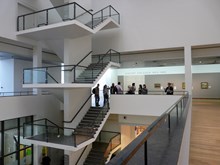 Van Gogh Museum
The Van Gogh Museum is an art museum in Amsterdam, Netherlands, dedicated to the works of the Dutch painter Vincent van Gogh and his contemporaries. It has the largest collection of Van Gogh's paintings and drawings in the world. The museum had 1,600,300 visitors in 2011. It is the most visited museum in the Netherlands and the 23rd most visited art museum worldwide. 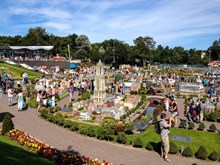 Madurodam Miniature City
Madurodam is a miniature city located in Scheveningen, The Hague, in the Netherlands. It is a model of a Dutch town on a 1:25 scale, composed of typical Dutch buildings and landmarks, as are found at various locations in the country. This major Dutch tourist attraction was built in 1952 and has been visited by tens of millions of visitors ever since.

Enjoy a miniaturised flavour of the whole of the Netherlands at Madurodam
Source: wikipedia.org 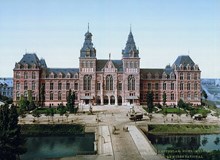 Browse through the paintings of the Dutch masters at the Rijksmuseum 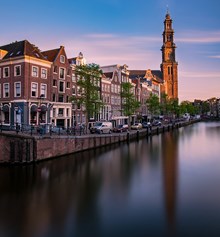 Amsterdam
Amsterdam is the Netherlands’ capital, known for its artistic heritage, elaborate canal system and narrow houses with gabled facades, legacies of the city’s 17th-century Golden Age. Its Museum District houses the Van Gogh Museum, works by Rembrandt and Vermeer at the Rijksmuseum, and modern art at the Stedelijk.

Keukenhof Gardens
“
Each year over 7,000,000 bulbs are hand-planted to create the world’s largest flower garden in Lisse, about 15 miles of Amsterdam. Literally means “kitchen garden”, Keukenhof Gardens was listed in World’s Top 25 Attractions in 2010 as one of the most popular destinations in the Netherlands."

Scheveningen International Sand Sculpture Festival
Between late April-early June, sculptors from all over the world descend on Scheveningen to create inspired, weird and wonderfully spectacular artworks along the beach. Interestingly, as the sand at Scheveningen itself is not suitable for the purpose – sand has to be specially 'imported' from elsewhere in the Netherlands. 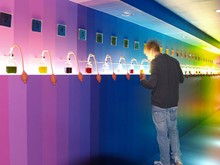 House of Bols
“
The House of Bols revolves around the history of Lucas Bols, the world's oldest distillery. In this museum, near Museumplein on the Paulus Potterstraat in Amsterdam, opposite the van Gogh Museum, you will receive all kinds of information about the world of cocktails and bartending."