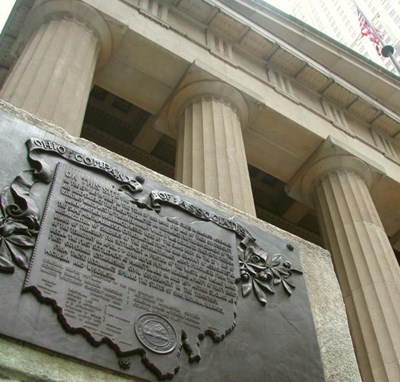 ABOUT OHIO
Ohio is a Midwestern state in the United States. The 34th largest state by area in the U.S. , it is the 7th-most populous with nearly 11.5 million residents. The state's capital is Columbus. The Anglicized name 'Ohio' comes from the Iroquois word ohi-yo’, meaning 'great river'. The state, originally partitioned from the Northwest Territory, was admitted to the Union as the 17th state (and the first under the Northwest Ordinance) on March 1, 1803.
Popular Goals

Go to the Rock and Roll Hall of Fame
The Rock and Roll Hall of Fame and Museum is a museum located on the shore of Lake Erie in downtown Cleveland, Ohio, United States, dedicated to archiving the history of some of the best-known and most influential artists, producers, and other people who have in some major way influenced the music industry, particularly in the area of rock music. The museum is part of the city's redeveloped North Coast Harbor.

Visit the Columbus Zoo and Aquarium
The Columbus Zoo and Aquarium is a non-profit zoo located in Powell, Ohio, just north of Columbus. The land lies along the eastern banks of the O'Shaughnessy Reservoir on the Scioto River, at the intersection of Riverside Drive and Powell Road. It has a worldwide reputation, largely attributable to the efforts and promotion of director emeritus Jack Hanna. In 2009, it was named by the USA Travel Guide as the number one zoo in America.

Stick a toe in Lake Erie
Lake Erie is the fourth largest lake (by surface area) of the five Great Lakes in North America, and the thirteenth largest globally. It is the southernmost, shallowest, and smallest by volume of the Great Lakes and therefore also has the shortest average water residence time. It is bounded on the north by the Canadian province of Ontario, on the south by the U.S. states of Ohio, Pennsylvania, and New York, and on the west by the state of Michigan.

Attend the Ohio State Fair
The Ohio State Fair is one of the largest state fairs in the United States. In 2006 the attendance was 814,512, up 12,000 from 2005. The state fair contributes as much as 280 million dollars to the state economy. It is held in early August in Columbus.

Stick a toe in Lake Erie

Visit the Rock and Roll Hall of Fame and Museum

Visit the Cleveland Metroparks Zoo and The RainForest

Visit the Cleveland Museum of Art

Visit the National Museum of the United States Air Force

Visit the Boonshoft Museum of Discovery

Visit the Columbus Museum of Art

Visit the World's Tallest Our Lady of Guadalupe

Visit the Museum of Divine Statues

Visit the house from A Christmas Story

Ohio State Fair
The Ohio State Fair is one of the largest state fairs in the United States. In 2006 the attendance was 814,512, up 12,000 from 2005. The state fair contributes as much as 280 million dollars to the state economy. It is held in early August in Columbus. 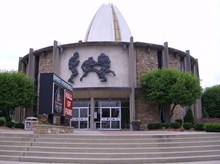 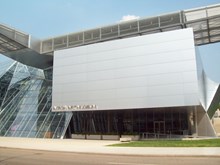 Akron Art Museum
The Akron Art Museum is an art museum in Akron, Ohio, USA. The museum first opened its doors on February 1, 1922, as the Akron Art Institute. It was located in two borrowed rooms in the basement of the public library. The Institute offered classes in arts appreciation and has grown considerably since that time, 20,000 square feet (1,900 m) of gallery space dedicated to the display of its collection of art produced since 1850. 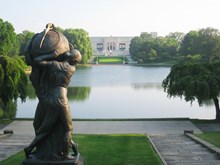