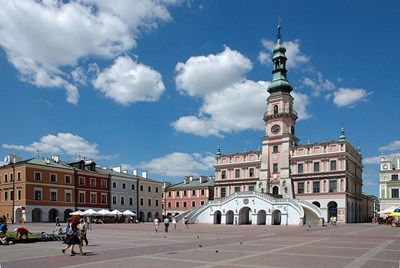 ABOUT POLAND
Poland, officially the Republic of Poland, is a country in Central Europe bordered by Germany to the west; the Czech Republic and Slovakia to the south; Ukraine, Belarus and Lithuania to the east; and the Baltic Sea and Kaliningrad Oblast, a Russian exclave, to the north. The total area of Poland is 312,679 square kilometres (120,726 sq mi), making it the 69th largest country in the world and the 9th largest in Europe.
Source: Wikipedia
Popular Goals

The Masurian Lake District or Masurian Lakeland is a lake district in northeastern Poland within the geographical region of Masuria. It contains more than 2,000 lakes. Currently, it is in the run for being listed into one of the New7Wonders of Nature. The Lakeland extends roughly 290 km (180 mi) eastwards from the lower Vistula River to the Poland-Lithuania border, and occupies an area of roughly 52,000 square kilometres.

Rynek Główny is a spacious square surrounded by historical townhouses (kamienice), palaces and churches. The center of the square is dominated by the Sukiennice (the Cloth Hall or Drapers' Hall), rebuilt in 1555 in the Renaissance style, topped by a beautiful attic or Polish parapet decorated with carved masks. On one side of the Sukiennice is the Town Hall Tower (Wieża ratuszowa), on the other the 10th century Church of St. Wojciech (St. Adalbert's) and 1898 Adam Mickiewicz Monument. Rising above the square are the Gothic towers of St. Mary's Basilica (Kościół Mariacki).

Kraków is in Lesser Poland Lowland, the capital city of the Malopolskie (Lesser Poland or Little Poland) province in the southern region of Poland. It covers both banks of the Wisla (or Vistula) river. Uplands region at the foot of the Carpathian Mountains. It is Poland's second largest city, with a population of 756,000 in 2007 (1.4 million after including surrounding communities).

Visit Wroclaw, the city of 100 bridges

Explore Cracow and its the medieval market square (UNESCO)

Explore the 300 km deep Wieliczka Salt Mine
Festivals and Events

Witness Polish street theatre at the Art of the Street Festival

Attend the ‘Jewish Woodstock’ at the Jewish Culture Festival

Attend the summertime recitals at the Chopin Manor

Wear a costume for the Juwenalia carnival

Attend the Off Festival

Participate in a sea-shanty festival in Mikolajki

Attend the Euro 2012 in Poland

Watch the Corpus Christi procession in Lowicz
Other Goals

Pay homage to the victims of the Holocaust at Auschwitz

Explore the Wawel Castle in Cracow

See the chapel sculpted in salt at the Wieliczka Salt Mine

Walk through the Warsaw Rising Museum

Go horse-riding in the Polish countryside

Visit the Jagiellonian University in Cracow

Stroll around the white sands of the Kolobrzeg

Ride a hucul, a rare pony from the Carpathian Mountains

Go mushroom picking with the locals in early autumn

Go on a sleigh ride in Tatras

Run at the Cracovia Marathon

Cycle through the nature trails at Bialowieza National Park

Visit the Remuh Synagogue in Cracow

See the Icon of the Black Madonna reputed to have been painted by St. Luke

Visit Museum of the History of Polish Jews

Escape by bike to Hel Peninsula

Take in the giant Raclawice Panorama at Wroclaw

Spend the day at the beaches at the Pomeranian coast

Explore the Teutonic castles at Malbork and Gniew

Hike in the Kampinos National Park near Warsaw

See the manor house where Chopin was born in Zelazowa Wola

Explore the Brodnica or Myslibórz lakelands by Canoe

Celebrate Constitution Day with the locals 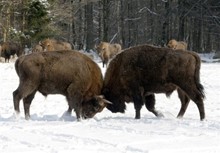