51 people have been here. 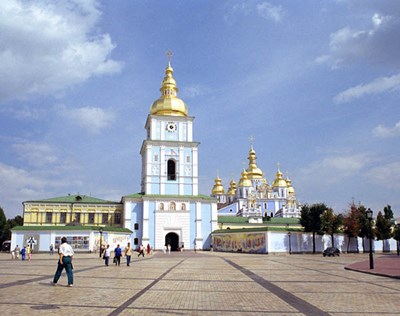 ABOUT UKRAINE
Ukraine is a country in Eastern Europe. It lies at the northwest end of the Black Sea, with Russia to the east, Belarus to the north, Poland to the northwest, Slovakia and Hungary to the west, and Romania to the south west and south, with Moldova in between. Most of the country (the central and eastern portions) was formerly a part of Russian Empire; after the October Revolution and the Civil War, the entire country, known as the Ukrainian Soviet Socialist Republic, was a part of the Soviet Union. Ukraine is the second-largest country in Europe, albeit with a slightly declining population.
Source: Wikipedia
Popular Goals

Kiev or Kyiv is the capital and the largest city of Ukraine, located in the north central part of the country on the Dnieper River. The population as of the 2001 census was 2,611,300. However, higher numbers have been cited in the press. Kiev is an important industrial, scientific, educational and cultural centre of Eastern Europe. It is home to many high-tech industries, higher education institutions and world-famous historical landmarks.

Take a guided tour to Chernobyl
The Chernobyl Nuclear Power Plant Zone of Alienation is the officially designated exclusion area around the site of the Chernobyl nuclear reactor disaster. It is commonly known as the Chernobyl Exclusion Zone and also as the 30 Kilometer Zone or simply The Zone .

Visit Chernobyl
The Chernobyl disaster (locally Ukrainian: Чорнобильська катастрофа, Chornobylska Katastrofa – Chornobyl Catastrophe) was a catastrophic nuclear accident that occurred on 26 April 1986 at the Chernobyl Nuclear Power Plant in Ukraine, which was under the direct jurisdiction of the central authorities of the Soviet Union. An explosion and fire released large quantities of radioactive contamination into the atmosphere, which spread over much of Western USSR and Europe.

See the Golden Gate of Kiev

Attend the Orthodox Epiphany in Kiev

Attend the International Biennale of Contemporary Art at Mystetskyi Arsenal

Attend the KaZantip Republic
Other Goals

Eat a Chicken Kiev in Kiev

Visit the Cathedral of St Vladimir

See an opera at the Ivan Franko Opera House

Go wine- tasting in the Wine Tasting Hall in Yalta

Stroll in the Livadia Palace, the summer home of old Tsars

Visit the Mystetskyi Arsenal, a museum of arts and science

Watch a football match at Euro 2012

Discover the underground submarine base at Sevastopol

Make a trip south to Yalta, the 'Pearl of the Crimea'

Snowboard in the Carpathian Mountains

Join the locals and swim in the Dnieper River in Kiev

Explore the city on a rock outcrop, the Kamyanets-Podilsky

Relive the world's most famous cinema scene in Odessa

Climb onto the ice of the Dnieper in winter to fish

Drink a glass of Krasny Kamen

Explore the catacombs of Sevastopol 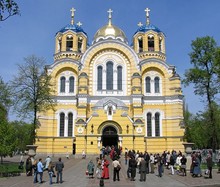 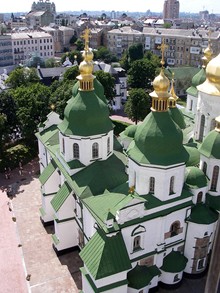 Saint-Sophia Cathedral
“
Kiev’s crown jewel and grand UNESCO World Heritage Site is one of the most spectacular cathedrals in the world. Saint-Sophia Cathedral was an eleventh-century attempt to both honor and surpass the Hagia Sophia in Istanbul, built some five-hundred years earlier."