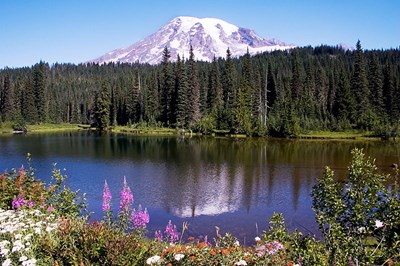 ABOUT WASHINGTON
Washington is a state in the Pacific Northwest region of the United States. Washington was carved out of the western part of Washington Territory which had been ceded by Britain in 1846 by the Oregon Treaty as settlement of the Oregon Boundary Dispute. It was admitted to the Union as the forty-second state in 1889. The United States Census Bureau estimated the state's population to be 6,664,195 in 2009.
Popular Goals

Pike Place Market is a public market overlooking the Elliott Bay waterfront in Seattle, Washington, United States. The Market opened August 17, 1907, and is one of the oldest continually operated public farmers' markets in the United States. It is a place of business for many small farmers, craftspeople and merchants. Named after the central street, Pike Place runs northwest from Pike Street to Virginia Street, and remains one of Seattle's most popular tourist destinations.

Go to the top of the Space Needle

The Space Needle is a tower in Seattle, Washington and is a major landmark of the Pacific Northwest region of the United States and a symbol of Seattle. Located at the Seattle Center, it was built for the 1962 World's Fair, during which time nearly 20,000 people a day used the elevators, with over 2.3 million visitors in all for the World Fair. The Space Needle is 605 feet (184 m) high at its highest point and 138 feet (42 m) wide at its widest point and weighs 9,550 tons.

The Seattle Central Library is the flagship library of the Seattle Public Library system. The 11-story (185 feet or 56 meters high) glass and steel building in downtown Seattle, Washington was opened to the public on Sunday, May 23, 2004. Rem Koolhaas and Joshua Prince-Ramus of OMA/REX were the principal architects and Hoffman Construction Company of Portland, Oregon, was the general contractor.

Visit Mount St. Helens
Mount St. Helens is an active stratovolcano located in Skamania County, Washington, in the Pacific Northwest region of the United States. It is 96 miles (154 km) south of Seattle and 50 miles (80 km) northeast of Portland, Oregon. Mount St. Helens takes its English name from the British diplomat Lord St Helens, a friend of explorer George Vancouver who made a survey of the area in the late 18th century.

The Seattle Art Museum (commonly known as "SAM") is an art museum located in Seattle, Washington, USA. It maintains three major facilities: its main museum in downtown Seattle; the Seattle Asian Art Museum (SAAM) in Volunteer Park on Capitol Hill, and the Olympic Sculpture Park on the central Seattle waterfront, which opened on January 20, 2007. Admission to the sculpture park is always free.

Hike the trails at Mount Rainier

Mount Rainier is a massive stratovolcano located 54 miles (87 km) southeast of Seattle. It is the most prominent mountain in the contiguous United States and the Cascade Volcanic Arc, with a summit elevation of 14,411 feet (4,392 m). Mt. Rainier is considered one of the most dangerous volcanoes in the world, and it is on the Decade Volcano list. Because of its large amount of glacial ice, Mt. Rainier could potentially produce massive lahars that would threaten the whole Puyallup River valley.

Mount Rainier National Park is a United States National Park located in southeast Pierce County and northeast Lewis County in Washington state. It was one of the US's earliest National Parks, having been established on March 2, 1899 as the fifth national park in the United States. The park contains 368 square miles (950 km) including all of Mount Rainier, a 14,411-foot (4,392 m) stratovolcano.

Olympic National Park is located in the U.S. state of Washington, in the Olympic Peninsula. The park can be divided into three basic regions: the Pacific coastline, the Olympic Mountains, and the temperate rainforest. U.S. President Theodore Roosevelt originally created Mount Olympus National Monument in 1909 and after Congress voted to authorize a re-designation to National Park status, President Franklin Roosevelt signed the legislation in 1938.
Festivals and Events

Hike the trails at Mount Rainier

Visit the Science Fiction Museum and Hall of Fame

Visit the Museum of Glass: International Center for Contemporary Art

Visit a lavender farm in Sequim

Drive over the Cascade Mountains

Ride the Great Wheel in Seattle

Visit the Burke Museum of Natural History and Culture

Visit the Future of Flight Aviation Center and Boeing Tour

Walk across the Tacoma Narrows Bridge

Soak in the culture at the Freemont Sunday Market

Visit the Museum of Pop Culture 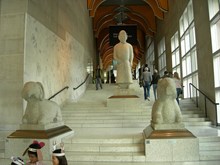 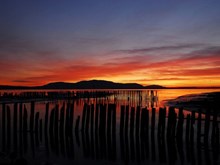 Sea Kayak the San Juan Islands
“
For sea kayakers, the San Juan Islands combine the best of all worlds: Only an hour ferry ride from the mainland, they’re sheltered from ocean swells by the Olympic Peninsula and Vancouver Island, and yet, with some 170 islands and islets, they offer endless opportunities for adventure. Though kayakers can easily put in just a few hours of paddling, doing so for several days offer a true immersion."

Transect the Olympic
“An abundance of grit and manly vim” was requisite for a spot on the first transect of the Olympic Peninsula, the Press Expedition of 1889. The group’s vim got tested; they did it in the dead of winter. Trace their route in a saner season (we recommend summer) and you’ll cross the interior of Olympic National Park in a week on trails that thread the lush territory between Mount Olympus and Hurricane Ridge. 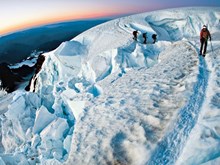 Climb Mount Rainier
“
Mount Rainier won’t be taken lightly. Four other mountains in the Lower 48 exceed it in height, yet each can be summited in what amounts to a long day hike while wearing trail shoes. Roughly half of Rainier climbers are turned back, due mostly to severe weather and fatigue. Commercial outfitters simplify the process enormously, but in the end you climb your own mountain."

Museum of Pop Culture
The Museum of Pop Culture, or MoPOP (previously called EMP Museum) is a nonprofit museum dedicated to contemporary popular culture. It was founded by Microsoft co-founder Paul Allen in 2000 as the Experience Music Project. Since that time MoPOP has organized dozens of exhibits, 17 of which have toured across the US and internationally.

Visit the Museum of Pop Culture 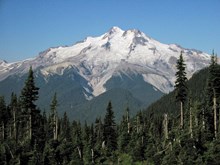 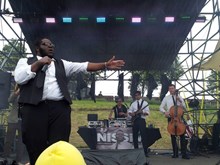 Bumbershoot
Bumbershoot is an annual international music and arts festival held in Seattle, Washington. One of North America's largest such festivals, it takes place every Labor Day weekend at the 74-acre (299,000 m²) Seattle Center, which was built for the 1962 World's Fair. Seattle Center includes indoor theaters, outdoor stages, McCaw Hall, and Memorial Stadium.