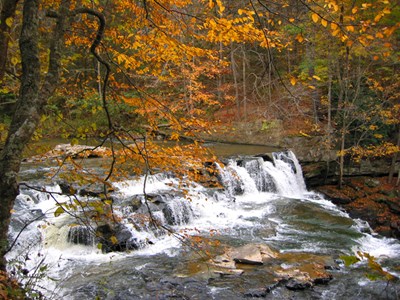 ABOUT WEST VIRGINIA
West Virginia is a state in the Appalachian and Mid-Atlantic regions of the United States, bordered by Virginia to the southeast, Kentucky to the southwest, Ohio to the northwest, and Pennsylvania and Maryland to the northeast. The capital and largest city is Charleston. West Virginia became a state following the Wheeling Conventions, breaking away from Virginia during the American Civil War. The new state was admitted to the Union on June 20, 1863, and was a key Civil War border state.
Popular Goals

Snowshoe Mountain is a ski resort located in Snowshoe, West Virginia, in the Allegheny Mountains. The resort is located in the bowl shaped convergence of two mountains, Cheat and Back Allegheny, at the head of the Shavers Fork of the Cheat River. Snowshoe is home to the second highest point in the state and the peak elevation for Cheat Mountain, at Thorny Flat, which reaches 4848 feet (1478 m) above sea level.

Visit the National Radio Astronomy Observatory
The National Radio Astronomy Observatory (NRAO) is a Federally Funded Research and Development Center of the United States National Science Foundation operated under cooperative agreement by Associated Universities, Inc for the purpose of radio astronomy. NRAO designs, builds, and operates its own high sensitivity radio telescopes for use by scientists around the world.

Visit Seneca Rocks Discovery Center
Seneca Rocks is a large crag and local landmark in Pendleton County in the Eastern Panhandle of West Virginia, USA. It is easily visible and accessible along West Virginia Route 28 near U.S. Route 33 in the Spruce Knob-Seneca Rocks National Recreation Area of the Monongahela National Forest. One of the best-known scenic attractions in West Virginia, the sheer rock faces of Seneca Rocks are a popular challenge for rock climbers.

Visit Berkeley Springs Historic State Park
Berkeley Springs State Park is a state park located in the center of Berkeley Springs, West Virginia. The centerpieces of this park are the spa facilities. These waters are currently and historically billed as having medicinal or restorative powers, generally taken internally for digestive disorders or in baths for stress relief. Native peoples visited these springs as did George Washington.
Festivals and Events

Visit the Swiss village of Helvetia 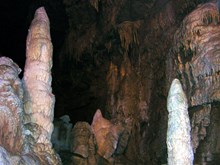 The Lost World Caverns
Lost World Caverns, located just outside of Lewisburg, West Virginia, is an underground natural series of caverns. In November 1973, the caverns were registered as a National Natural Landmark as they "feature terraced pedestal-like stalagmites, flowstone, curtains, rimstone, domepits, and waterfalls. " Originally named "Grapevine Cave", the only entrance was a long vertical drop into which farmers used to dump dead livestock and other trash. 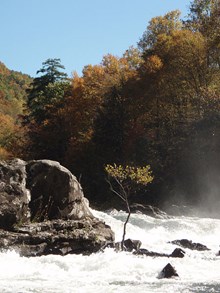 Raft the Gauley River
“
The Gauley River is a 105-mile-long (169 km) river in West Virginia. It merges with the New River to form the Kanawha River, a tributary of the Ohio River. It is one of the most popular advanced whitewater runs in the Eastern United States and is the chief feature of the Gauley River National Recreation Area."