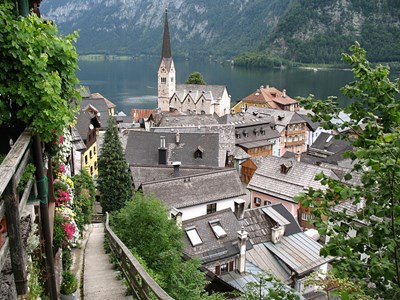 ABOUT AUSTRIA
Austria (literally "the Eastern Realm" or "Eastern Empire") is a land-locked alpine German speaking country in Central Europe bordering Switzerland and Liechtenstein to the west, Germany and Czech Republic to the north, Slovakia and Hungary to the east and Slovenia and Italy to the south. Austria, along with neighboring Switzerland, is the winter sports capital of Europe. However, it is just as popular for summer tourists who visit its historic cities and villages and hike in the magnificent scenery of the Alps.
Popular Goals

Vienna is the capital of the Republic of Austria and one of the nine states of Austria. Vienna is Austria's primary city, with a population of about 1.7 million (2.3 million within the metropolitan area, more than 25% of Austria's population), and is by far the largest city in Austria, as well as its cultural, economic, and political centre. It is the 10th largest city by population in the European Union.

Salzburg is the fourth-largest city in Austria and the capital of the federal state of Salzburg. Salzburg's "Old Town" (Altstadt) with its world famous baroque architecture is one of the best-preserved city centres north of the Alps, and was listed as a UNESCO World Heritage Site in 1997. The city is noted for its Alpine setting. Salzburg was the birthplace of 18th-century composer Wolfgang Amadeus Mozart.

The Eisriesenwelt (German for "World of the Ice Giants") is a natural limestone ice cave located in Werfen, Austria, about 40 km south of Salzburg. The cave is inside the Hochkogel mountain in the Tennengebirge section of the Alps. It is the largest ice cave in the world, extending more than 42km and visited by about 200,000 tourists every year.

Visit the lakeside village of Hallstatt
Hallstatt, Upper Austria is a village in the Salzkammergut, a region in Austria. It is located near the Hallstätter See (a lake). At the 2001 census it had 946 inhabitants. Alexander Scheutz has been mayor of Hallstatt since 2009.

Enjoy coffee and cake at a local Kaffeehaus

Light a candle in St. Stephen’s Cathedral in Vienna

St. Stephen's Cathedral is the mother church of the Archdiocese of Vienna and the seat of the Archbishop of Vienna, Christoph Cardinal Schönborn, OP. Its current Romanesque and Gothic form seen today, situated at the heart of Vienna, Austria in the Stephansplatz, was largely initiated by Rudolf IV and stands on the ruins of two earlier churches, the first being a parish church consecrated in 1147.
Festivals and Events

Listen to classical music at the Salzburg festival

Take part in the Snowbombing festival in Mayrfofen

Participate in the World Bodypainting Festival

Attend a Chamber Concert at the International Mozarteum Foundation

Observe Austrian traditions at the Lederhosen Festival in Windischgarsten

Participate in the Danube Island Festival

Light a candle in St. Stephen’s Cathedral in Vienna

Ride the Ferris Wheel (Riesenrad) in the Prater Amusement Park

Savour a plate of Wiener Schnitzel and Apfelstrudel

Taste a glass of glühwein (mulled wine) at the Christkindlmarkt

Pay homage to Mozart at his birthplace Getreidegasse in Salzburg

Have a picnic on the banks of Wolfgangsee

Witness the Domkirche in Vienna

Visit Mondsee, one of the warmest lakes in the Salzkammergut

Indulge in any of the winter sports on the Austrian Alps

See the Chapel of the Hofburg in Vienna

Discover the Parliament and the Votive Church in Vienna

Explore the forests and pastures of Tyrol

Discover the cemetery and catacombs at the Peterskirche

Take in the views around Hallstättersee Lake

Drink a bottle of Ottakringer beer

Visit the Historic Center of Vienna

Take a funicular to Hungerburg from Innsbruck

Take in the scenery while travelling on the Austrian Steam Train

Dive in the Green Lake

Tour the vineyards of Lower Austria, Southern Styria and Burgenland

Ride the cable car to Hafelekar in Tirol

Order an Einspänner in Vienna

See the Hohensalzburg Fortress (UNESCO) in the Altstadt

Stroll around the Alter Markt in Vienna

Discover gothic paintings at the Landesmuseum Joanneum in Graz

Spend a night at the opera in Vienna

Visit the Neue Galerie in the Herbenstrein Palace in Graz

See the Mausoleum of Emperor Ferdinand II in Graz 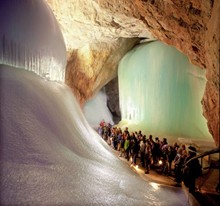 Eisriesenwelt Werfen (Werfen Ice Caves)
Visit the largest Ice caves on the planet and discover the magical sights offered with the district of Salzburg. A masterpiece of ice and rock awaits you!

Hallstatt, Austria
“
Located between Salzburg and Graz, in the Salzkammergut Lake District of Austria, Hallstatt is a little town of breathtaking views. Considered to be the oldest still inhabited settlement in Europe, Hallstatt is a UNESCO heritage site and an important Austrian tourist attraction."

Vienna
Vienna is the capital of the Republic of Austria and one of the nine states of Austria. Vienna is Austria's primary city, with a population of about 1.7 million (2.3 million within the metropolitan area, more than 25% of Austria's population), and is by far the largest city in Austria, as well as its cultural, economic, and political centre. It is the 10th largest city by population in the European Union.