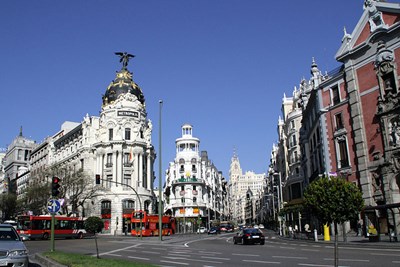 ABOUT SPAIN
Spain, officially the Kingdom of Spain, is a country and member state of the European Union located in southwestern Europe on the Iberian Peninsula. Its mainland is bordered to the south and east by the Mediterranean Sea except for a small land boundary with the British Overseas Territory of Gibraltar; to the north by France, Andorra, and the Bay of Biscay; and to the northwest and west by the Atlantic Ocean and Portugal.
Source: Wikipedia
Popular Goals

Barcelona is the capital and the most populous city of the Autonomous Community of Catalonia and the second largest city in Spain, after Madrid, with a population of 1,621,537 within its administrative limits on a land area of 101.4 km (39 sq mi).

Antoni Plàcid Guillem Gaudí i Cornet, (25 June 1852 – 10 June 1926) was a Spanish architect who worked during the Modernisme period but became famous for his unique and highly individualistic designs regarded as beyond the scope of Modernisme. He is sometimes referred to, in English, by the Spanish translation of his name, Antonio Gaudí.

Madrid is the capital and largest city of Spain. The population of the city is roughly 3.3 million and the entire population of the Madrid metropolitan area is calculated to be 6.271 million. It is the third largest city in the European Union, after London and Berlin, and its metropolitan area is the third largest in the European Union after London and Paris. The city spans a total of 604.3 km (233.3 sq mi).

The Temple Expiatori de la Sagrada Família, often simply called the Sagrada Família, is a massive, privately-funded Roman Catholic church that has been under construction in Barcelona, Catalonia, Spain since 1882 and is not expected to be complete until at least 2026. A portion of the building's interior is scheduled to open for public worship and tours by September 2010.

The Guggenheim Museum Bilbao is a museum of modern and contemporary art designed by Canadian-American architect Frank Gehry, built by Ferrovial and located in Bilbao, Basque Country, Spain. It is built alongside the Nervion River, which runs through the city of Bilbao to the Atlantic Coast. The Guggenheim is one of several museums belonging to the Solomon R. Guggenheim Foundation. The museum features permanent and visiting exhibits of works by Spanish and international artists.

The Alhambra, the complete form of which was Calat Alhambra ("the red fortress"), is a palace and fortress complex constructed during the mid 14th century by the Moorish rulers of the Emirate of Granada in Al-Andalus, occupying the top of the hill of the Assabica on the southeastern border of the city of Granada in the Autonomous Community of Andalusia.

Throw tomatoes at strangers in the La Tomatina Festival in Bunol, Valencia

La Tomatina is a festival that is held in the Valencian town of Buñol, a town located 30 km inland from the Mediterranean Sea in which participants throw tomatoes and get involved in this tomato fight purely for fun. It is held on the last Wednesday of August, during the week of festivities of Buñol.

Walk the Camino de Santiago
The Way of St. James or St. James' Way is the pilgrimage to the Cathedral of Santiago de Compostela in Galicia in northwestern Spain, where tradition has it that the remains of the apostle Saint James are buried.
Festivals and Events

Throw tomatoes at strangers in the La Tomatina Festival in Bunol, Valencia

Attend the Running of the Bulls in Pamplona

Attend the Semana Santa in Seville

Attend the Madrid version of the traditional Mardi Gras Carnival

Tell stories around a bonfire at the Festival of San Juan

Attend the Stiges Carnaval at Catalonia

Participate in the La Tomatina Festival

See the Running of the Bulls in Pamplona

Cheer on your favourite team at the Festival Flamenco

Attend the Our Lady of Begoña Festival

Visit the Great Cathedral and Mosque in Cordoba

Visit the Alcázar of Seville

Spend a day in Islas Cies

Visit the Dalí Theatre and Museum

Snack at a tapas bar at Sevilla

Feel the passion of flamenco, in music, dance and song throughout Andalucía

Take a Spanish Lesson from a local

Explore the art paradise at The Prado in Madrid

Run with the bulls in Pamplona

See the Puerta del Sol and the Plaza Mayor in Madrid

Stroll around the winding streets of Cordoba

See the palace-fortress of Alhambra

Take a cable car to Montjuic

Visit the Valencia Cathedral that claims possession of the Holy Grail

Visit the university town of Salamanca

Explore the Atlantic beaches at Cadiz

Party at the World's Largest Nightclub (Privilege) in Ibiza

Have sangria and tapas in Spain

Sip mint tea at a tetería in a hammam

Get a drink at a gourmet pintxo bar in Bilbao

See all of Madrid from the Tetas de Vallecas, a set of hills on the outskirts

Run in the Madrid Marathon

Get a grapeskin spa treatment

Spend the day at the Terra Mítica amusement park

Take a stroll through La Boqueria

Go jetskiing in any seaside resort

Cycle round the Anillo Verde Ciclista

Explore the Green valleys of Asturias

Discover the Plaza Dos de Mayo, birthplace of the Movida

Visit the HIstoric Center of Cordoba

Visit the house where Cervantes was born

Hike around the Cadiz province

Dive near islands off Costa Brava

Go fishing in the rivers and streams of the Pyrenees

Visit the Museum of Human Evolution

Go skiing in the Pyrenees at Baqueira-Beret

Take the funicular to Tibidabo

Soak in a real Arab bath or hammam

Explore the Caves of Drach

Watch for the aguila imperial at Parque Nacional Monfrague

Visit the Historic City of Toledo

Catch a flamenco show in Andalusia

Pedal along one of the many vias verdes, railway tracks converted to cycle paths

Visit the Old City of Salamanca

Go wind-surfing near the Straits of Gibraltar

Run in the Barcelona Marathon

Get lost in Guernica

Visit the Cave of Altamira

Visit the Historic City of Segovia and Aqueduct

See the the Palau de la Generalitat at Barcelona

Visit the Tower of Hercules

Visit Lago Martel, one of the largest subterranean lakes

Spend the day at the Universal Mediterranea theme park

Hike to the top of Pico del Teide

Visit the Valle de los Caídos (Valley of the Fallen)

Look up in Barcelona

Participate in the Vuelta a España

Take a boat ride on the Lake Martel to discover stalagmites

Surf around the Basque village of Mundaka

Museo del Prado
The Museo del Prado is the main Spanish national art museum, located in central Madrid. It features one of the world's finest collections of European art, from the 12th century to the early 19th century, based on the former Spanish Royal Collection, and unquestionably the best single collection of Spanish art. Founded as a museum of paintings and sculpture, it also contains important collections of other types of works. 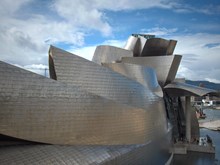 Guggenheim Museum Bilbao
The Guggenheim Museum Bilbao is a museum of modern and contemporary art designed by Canadian-American architect Frank Gehry, built by Ferrovial and located in Bilbao, Basque Country, Spain. It is built alongside the Nervion River, which runs through the city of Bilbao to the Atlantic Coast. The Guggenheim is one of several museums belonging to the Solomon R. Guggenheim Foundation. The museum features permanent and visiting exhibits of works by Spanish and international artists. 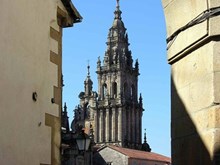 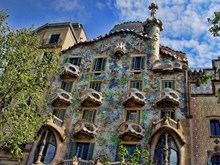 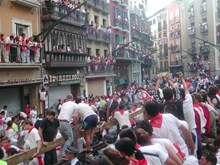 Running of the Bulls at the Festival of San Fermin
The Running of the Bulls is a practice that involves running in front of a small group of cattle, typically six, of the toro bravo breed that have been let loose on a course of a sectioned-off subset of a town's streets. The most famous running of the bulls is that of the eight-day festival of Sanfermines in honour of Saint Fermin in Pamplona, although they are also traditionally held in other places such as towns and villages across Spain, Portugal, in some cities in Mexico, and southern France during the summer.

Run with the bulls in Pamplona

Attend the Running of the Bulls in Pamplona
Source: wikipedia.org 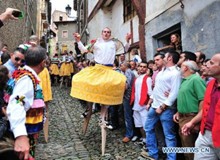 Walk the Camino de Santiago
It’s a hell of a long walk, but it’s worth it. Join dedicated trekkers from all over the world as they take on up to 400 miles of trail that winds through the Pyrenees Mountains in northern Spain and southern France. Hikers have been walking this pass since the Medieval Age, with the ultimate goal of reaching the Cathedral of Santiago de Compostela in Galicia, the end of the Christian pilgrimage. 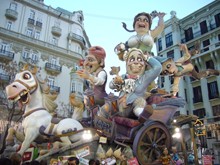 Las Fallas de Valencia
“
Las Fallas de Valencia is the most spectacular, complete fiesta on earth, without a shadow of a doubt! It takes place in March and is intended as a tribute to St. Joseph, Patron Saint of the Carpenters´guild, where (it is said) the tradition arose from. The basis of the fiesta are the 'Fallas' monuments, as is well known. In a display of art, irony and humour they are exhibited in the streets during this week, between the 15th and 19th of March. On the last day at midnight, this monuments are set on fire and burn in immense, spectacularly beautiful pyres."