13 people have been here. 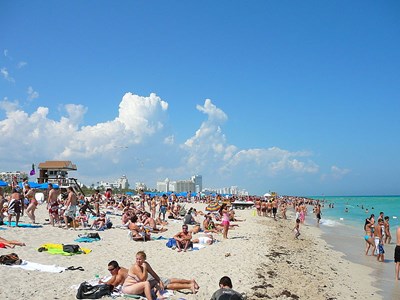 ABOUT FLORIDA
Florida is a state of the United States. It is located in the Southeastern United States, bordering Alabama to the northwest and Georgia to the north. Much of the state's land mass is a large peninsula with the Gulf of Mexico to the west, the Atlantic Ocean to the east and the Caribbean to the south. Florida was admitted as the 27th U.S. state in 1845, after a three hundred year period of European colonization.
Popular Goals

The Wizarding World of Harry Potter forms part of Universal Parks and Resorts' Islands of Adventure theme park in Orlando, Florida. It is one of seven themed areas within the park. The Wizarding World of Harry Potter was officially announced on May 31, 2007, and after a two and a half year construction period, the area officially opened to the public on June 18, 2010.

Magic Kingdom is one of four theme parks at the Walt Disney World Resort. The first park built at the resort, it opened October 1, 1971. Designed and built by WED Enterprises, the park's layout and attractions are similar to Disneyland in Anaheim, California. In 2009, the park saw an estimated 17.2 million visitors, making it the most visited theme park in the world.

See the alligators in the Everglades

The Everglades are subtropical wetlands in the southern portion of the U.S. state of Florida, comprising the southern half of a large watershed. The system begins near Orlando with the Kissimmee River, which discharges into the vast but shallow Lake Okeechobee. Water leaving the lake in the wet season forms a slow-moving river 60 miles (97 km) wide and over 100 miles (160 km) long, flowing southward across a limestone shelf to Florida Bay at the southern end of the state.

The Wizarding World of Harry Potter forms part of Universal Parks and Resorts' Islands of Adventure theme park in Orlando, Florida. It is one of seven themed areas within the park. The Wizarding World of Harry Potter was officially announced on May 31, 2007, and after a two and a half year construction period, the area officially opened to the public on June 18, 2010.

The John F. Kennedy Space Center (KSC) is the U.S. government installation that manages and operates America's astronaut launch facilities. Serving as the base for the country's three space shuttles, the NASA field center also conducts unmanned civilian launches from adjacent Cape Canaveral Air Force Station (operated by the 45th Space Wing). KSC has been the launch site for every U.S. human space flight since December 1968.

Attend the Springtime Festival in Tallahassee

Attend the Underwater Musical Festival in the Florida Keys

Attend the Mango Festival in Miami
Other Goals

Drive from Miami to Key West

Spend a day in St. Augustine

Go to the Dali Museum

See the mermaids at Weeki Wachee

Watch the sunset on Clearwater Beach

Play a round at Pirate's Cove Adventure Golf

Travel across the Sunshine Skyway Bridge

Eat at the original Columbia in Ybor City

Take a cruise on the Jungle Queen Riverboat

Drive over the Sunshine Skyway Bridge

Fly-Fish for the Florida Keys Slam

Feed the reindeer in Christmas

Have a hurricane party

Visit the Cummer Museum of Art

Kayak along the Florida West Coast

Visit the Fontainebleau in Miami Beach

The Epcot International Food & Wine Festival
The Epcot International Food & Wine Festival is an annual food festival at Epcot, in the Walt Disney World Resort in Bay Lake, Florida, typically from late September to mid-November, though in recent years the start date has moved forward to late August. Special kiosks are set up around the World Showcase with food and drinks that reflect various countries.The activities, themes and corporate sponsors have changed over the years since the festival began in 1995. 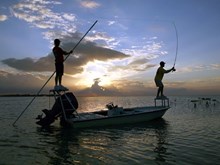 Fly-Fish for the Florida Keys Slam
“
Ever since legends like Stu Apte and baseball Hall of Famer Ted Williams started catching big game fish in Florida’s waters on fly rods, the biggest prize here has been the Florida Keys slam—bonefish, permit, tarpon. Each species presents its own challenges and rewards, which makes going for the slam such a rush for veteran saltwater fly anglers. To tick off all three species you will need to exercise a wide range of skills." 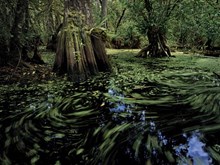 Big Cypress National Preserve
“
The “big” in Big Cypress is much more about land and sky than about trees. Most of the preserve’s giant cypress trees were long ago logged out, leaving behind their stunted kin. But few places can match the sense of spacious wilderness (720,000 acres, or 292,000 hectares) and primal pleasure of Big Cypress Swamp when you hike it under its own terms. Which, we submit, is when it’s underwater. That’s right—conventional wisdom may say to stick to the dry season, and that’s fine." 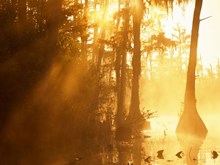 The Okeefenokee
“
The term “blackwater swamp” gets the mind conjuring reasonable, swamp-related aversions, such as alligators, cottonmouth snakes, carnivorous plants, and getting lost in dark tangles of vegetation. Okefenokee is indeed a swamp of the blackwater variety, but that refers to its tannic tinge. In truth, the water is clear; well-marked canoe trails make getting lost difficult; and much of the swamp is wide-open prairie—more big sky than heart of darkness." 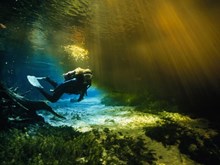 Ginnie Springs Cavern
“
Little known fact: Florida’s best diving isn’t in its saltwater. It’s hidden in the northwestern corner of the state, which is riddled with freshwater springs that flow through mazes of limestone passageways. Few people ever witness the strange sights of these underwater chambers—fossils, sunlight beaming in from holes in the cave ceilings, and even ancient mastodon tusks—because the only way to see it all is by donning a mask and flippers." 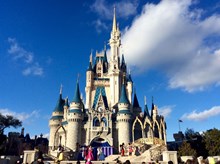 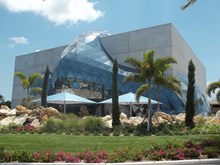