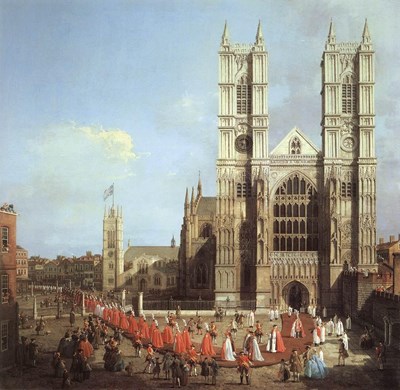 ABOUT ENGLAND
England is a country that is part of the United Kingdom. It shares land borders with Scotland to the north and Wales to the west; the Irish Sea is to the north west, the Celtic Sea to the south west and the North Sea to the east, with the English Channel to the south separating it from continental Europe. Most of England comprises the central and southern part of the island of Great Britain in the North Atlantic.
Source: Wikipedia
Popular Goals

London is the capital city of England and the United Kingdom, the largest metropolitan area in the United Kingdom, and the largest urban zone in the European Union by most measures. Located on the River Thames, London has been a major settlement for two millennia, its history going back to its founding by the Romans, who named it Londinium. London's ancient core, the City of London, largely retains its square-mile mediaeval boundaries.

Stonehenge is a prehistoric monument located in the English county of Wiltshire, about 3.2 kilometres (2.0 mi) west of Amesbury and 13 kilometres (8.1 mi) north of Salisbury. One of the most famous sites in the world, Stonehenge is composed of earthworks surrounding a circular setting of large standing stones. It is at the centre of the most dense complex of Neolithic and Bronze Age monuments in England, including several hundred burial mounds.

Go on the London Eye

The Merlin Entertainments London Eye (commonly the London Eye, or Millennium Wheel, formerly the British Airways London Eye) is a giant 135-metre (443 ft) tall Ferris wheel situated on the banks of the River Thames in the British capital. It is the tallest Ferris wheel in Europe, and the most popular paid tourist attraction in the United Kingdom, visited by over 3.5 million people annually making it more popular than the Taj Mahal and the Pyramids of Giza.

The British Museum is a museum of human history and culture in London. Its collections, which number more than seven million objects, are amongst the largest and most comprehensive in the world and originate from all continents, illustrating and documenting the story of human culture from its beginnings to the present. The British Museum was established in 1753, largely based on the collections of the physician and scientist Sir Hans Sloane.

Buckingham Palace is the official London residence of the British monarch. Located in the City of Westminster, the palace is a setting for state occasions and royal hospitality. It has been a rallying point for the British people at times of national rejoicing and crisis. Originally known as Buckingham House, the building which forms the core of today's palace was a large townhouse built for the Duke of Buckingham in 1705 on a site which had been in private ownership for at least 150 years.

Ride on the London Eye

The Merlin Entertainments London Eye (commonly the London Eye, or Millennium Wheel, formerly the British Airways London Eye) is a giant 135-metre (443 ft) tall Ferris wheel situated on the banks of the River Thames in the British capital. It is the tallest Ferris wheel in Europe, and the most popular paid tourist attraction in the United Kingdom, visited by over 3.5 million people annually making it more popular than the Taj Mahal and the Pyramids of Giza.

Visit the Tower of London

Her Majesty's Royal Palace and Fortress, more commonly known as the Tower of London, is a historic castle on the north bank of the River Thames in central London, England. It lies within the London Borough of Tower Hamlets, separated from the eastern edge of the City of London by the open space known as Tower Hill. It was founded towards the end of 1066 as part of the Norman Conquest of England.

Go to Stonehenge for Summer Solstice

Attend a book reading at the Oxford Literary Festival

Participate in the Jorvik Viking Festival

Participate in the Earth Day Event

Go to the York Carnival

Get drunk in the Southampton Beer Festival

Attend the Covent Garden May Fayre and Puppet Festival

Walk in the Oxford Pride

Attend the York Festival of Science and Technology
Other Goals

See the crown jewels in the Tower of London

Get a picture taken on Abbey Road like the Beatles

Visit The Shambles in York

Spend the day at the Alton Towers theme park

Take a ride on London’s Eye

See the ruins of the 12th-century Tintagel Castle, the birthplace of King Arthur

Get my picture taken on Abbey Road like the Beatles

See the Eden Project in Cornwall

Shop around the bohemian seaside town of Brighton

Attend a Liverpool vs. Manchester United match at Old Trafford

Visit one of the official homes of Queen Elizabeth II, the Windsor Castle

Spend the day at Oxford

Stroll through the Southbank Book Market in London

Explore he Warwick Castle built by William the Conqueror

Visit the Roman Baths in Bath

Take a photo at the Royal Observatory Greewich

Marvel at the medieval architecture of York

Watch a match at the Wimbledon Tennis Championships

Visit the Victoria and Albert Museum

Pay homage at the Westminster Abbey

See a play at the Globe Theatre

Take a walk through the Cornish Coastal Path

Travel the Pilgrim’s Way and visit the Canterbury Cathedral

Walk along the Blackpool Pleasure Beach

Visit the 9000 year old Cheddar Man in the Cheddar Caves

See the Angel of the North

Have cocktails at Cloud 23

Visit The Mailbox in Birmingham

Run for a cause at the London Marathon

See an Opera at the Royal Opera House in Covent Garden

Cheer your favourite team at the Oxford-Cambridge Boat Race

Hang out with the students at Cambridge

Travel to the village where Emily Brontë lived in Haworth, West Yorkshire

Light a candle at the York minster

Attend the ceremony of the keys at the Tower of London

Take to the water in Hyde Park

Visit the Angel of the North

Stay at the Guy Fawkes Inn in York

Dance in the ballroom at Blackpool Tower

Take a paddle boat out onto Lake Windermere

Ride on a double decker bus in London

Eat fish and chips in London

See the All Hallows Church in London

Stroll on the viewing deck of the Blackpool Tower, the Walk of Faith

Follow the Cockle Trail and discover local myths and legends

Visit the Lost Gardens of Heligan

Walk across the Clifton Suspension Bridge

Get an insight into British aristocracy by visiting Chatsworth House

Eat fish and chips on the English seaside

Visit the Horniman Museum and Gardens

Visit the White Cliffs of Dover

Explore the seaside town of Southwold

Explore castles and coves in Devon

Canoe along the Wye Valley

Walk the entre length of the river Thames

Watch a performance at the Royal Albert Hall

Eat a Cornish pasty in Cornwall

Watch cricket at the country grounds of Edgbaston in Warwickshire

Ride the dodgems at County Hall by Waterloo Station

Have an authentic Cornish pasty in Cornwall

Visit all the national parks in England

Go caving in the Yorkshire Dales

Attend a Liverpool vs Manchester United match at Old Trafford

Visit all 48 ceremonial counties in England

Spend an afternoon at the British Museum

Visit the birthplace of Shakespeare

Visit the Costume Museum in Bath

Visit all the parks in Northampton

See the Mary Rose in Portsmouth

Visit the Forest of Dean

Visit the Holocaust Centre in Nottinghamshire

Bet on your favourite horse at the Brighton Racecourse

See the Rosetta Stone at the British Museum

Walk on the glass floor at Blackpool Tower

Sail out to the National Trust’s Brownsea Island

Climb to the top of Peterborough Cathedral

Attend an event at Wembley Stadium

Visit the Waterfront Museum at Poole

Visit the Royal Pavilion in Brighton

Join actors dressed in period costumes aboard the Golden Hinde

Do the James Bond bus tour of London

Go to the Salford’s Lad’s Club

Take a walk on the Suffolk Heritage Coast

See the Starlings Roost on the Somerset Levels

National Gallery, London
The National Gallery is an art museum on Trafalgar Square, London, United Kingdom. Founded in 1824, it houses a collection of over 2,300 paintings dating from the mid-13th century to 1900. The gallery is an exempt charity, and a non-departmental public body of the Department for Culture, Media and Sport. Its collection belongs to the public of the United Kingdom and entry to the main collection (though not some special exhibitions) is free of charge. 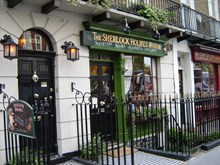 The Sherlock Holmes museum
The Sherlock Holmes Museum is a popular privately run museum in London, England, dedicated to the famous fictional detective Sherlock Holmes. It opened in 1990 and is situated in Baker Street, bearing the number 221B by permission of the City of Westminster, although it lies between numbers 237 and 241, near the north end of Baker Street in central London close to Regent's Park. 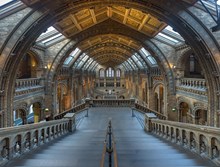 The Natural History Museum in London
The Natural History Museum is one of three large museums on Exhibition Road, South Kensington, London, England (the others are the Science Museum, and the Victoria and Albert Museum). Its main frontage is on Cromwell Road. The museum is an exempt charity, and a non-departmental public body sponsored by the Department for Culture, Media and Sport.

The Lake District
The Lake District, also known as The Lakes or Lakeland, is a mountainous region in North West England. A popular holiday destination, it is famous for its lakes and its mountains (or fells), and its associations with the early 19th century poetry and writings of William Wordsworth and the Lake Poets. The central, and most visited, part of the area is contained in the Lake District National Park, the largest of thirteen National Parks in England and Wales, and second largest in the UK. 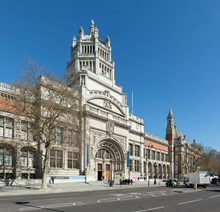 Oxford Literary Festival
The Sunday Times Oxford Literary Festival is an annual literary festival where visitors can meet and listen to authors and experts from a wide range of fields discussing a variety of topics from literature, politics, history, philosophy, economics, science, culinary, travel, environment and religion, to mention only a few. 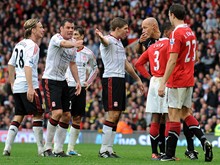 Man United v Liverpool
Liverpool F.C. and Manchester United F.C. rivalry is one of the most significant sporting rivalries in football, sometimes referred to as the North West derby. Both clubs hail from the North West of England, they are also the two most successful teams in England, between them they have won 116 honours, 58 each at present.